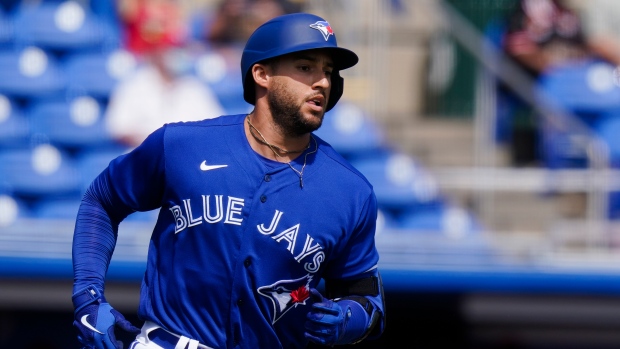 TORONTO — As the Toronto Blue Jays attempt to keep up with the postseason pack in a marathon season, the George Springer health saga continues.

Now into his third month of being hurt in some way, shape or form with a soft-tissue injury, Springer is once again on the 10-day IL due to his ailing quad, leaving the Jays with only one approach to take — the cautious one.

Getting Springer comfortable with the quad over the next week, inserting him back into the lineup when eligible next Thursday and attempting to manage it back to full health would be one route to go.

The other would be to take things extremely slow with the 31-year-old outfielder in order to make sure the right quad strain is 100 per cent healed when he does return this time.

Soft-tissue injuries can linger, which is exactly what this one is doing to the frustration of Springer and the Jays.

The team could use Springer helping them win ballgames now, but the key is having him at full health and unencumbered — aka roaming centre field — for the majority of the season.

If that means shutting him down until the Jays arrive back in Buffalo on June 1 to kick off a five-game homestand in upstate New York, then so be it.

Blue Jays GM Ross Atkins addressed the Springer adventure Thursday afternoon on a Zoom call, admitting their star is likely going to need more than a week to recover from this setback but refusing to put a concrete timeline on things.

“I would expect it will take more than just the IL stint, but there’s a chance I’m wrong,” Atkins said. “Based on the information that I have right now, I would expect that it’ll take longer than that IL stint. How much longer I’d rather comment more specifically on in the coming days.

“He’s actually feeling better. In talking to him [Wednesday] night and [Thursday] morning, he’s more encouraged by the day. But obviously very frustrated. What’s been with consistent with George is just his desire to play.”

Even if his homers match his IL stints, the instant impact Springer can bring was on display in his first four games as a Blue Jay.

Cleary not playing at full health and relegated to DH duties, Springer picked up three hits in his first 15 rust-filled at-bats, essentially winning a game for his new club with a flashy two-homer performance before exiting early on Sunday with “fatigue” that has somehow morphed into his latest muscle strain.

The messaging from the Blue Jays organization with regard to injuries is murky at the best of times, but despite the setback, Atkins still feels good about the medical staff’s process of getting Springer back on the field.

“All the testing that we could do, we were comfortable with,” Atkins said. “From an objective standpoint, the isometric strength test, the speed test, using GPS monitoring to ensure it wasn’t just our eye, was giving us all the confidence to take the next step, and the next step was playing centre field, which he already had done at the alternate site. We wanted there to be a progression and as a part of that progression, we knew there would be DH at-bats.

“Unfortunately, in the second game he felt something, which was the re-aggravation in that first at-bat, and at the time we felt it was just mild cramping or a stretching sensation and he felt that and we leaned heavily on his reporting.”

It does seem to be a lesson learned, however, even if there is blame to be shared with Springer having a huge amount of input surrounding his return.

“We feel very good about the process of preparing him to come back to play … all the information we had at the time suggested it was safe to take the next step, and unfortunately we had a setback,” Atkins said.

“I think there’s the obvious [regret] where you could just say, should we have taken more time? What I would tell you is that, as we’re trying to compete and trying to win, if we have objective reasons to take the next step and put him in a position to make our team better, we’re always going to do that.”

Springer’s return to the IL is just one of the issues the Jays now face.

A few hours after ruling Springer out, key bullpen cog David Phelps walked off the mound after a warmup pitch and landed on the IL with a right lat strain Thursday, while veteran utilityman Joe Panik also left the game with tightness in his left calf.

To make matters worse, in order to get backup catcher Reese McGuire back on the 40-man roster Wednesday, the Jays shifted Julian Merryweather to the 60-day IL with a lingering oblique injury, leaving the club without one of its most impactful bullpen arms until at least mid-June.

And McGuire is only active because Alejandro Kirk is out for at least four weeks with a hip flexor strain.

As they manage injuries over the next three weeks, the organization will also begin setting up shop in Buffalo once again, but it’ll be a different look at Sahlen Field in 2021 compared to last year.

With fans streaming in at 24 per cent capacity, the Jays will no longer be able to make use of an empty stadium and all the concourse space afforded to them, so they ponied up to make extensive changes to the ballpark.

Since announcing the plan to go from Dunedin to Buffalo when the heat and rain became real obstacles in the summer months in Florida, extensive renovations have taken place at Sahlen Field, some of which are still ongoing.

The Jays moved the bullpens off the field and behind the outfield walls, also building new batting cages in right field, resodding the outfield grass and renovating clubhouse and weight-room facilities.

The front office spent considerable time consulting with players about the move and essentially left the decision in their hands.

“Really, our option and alternative and our players’ preference were the two things,” Atkins said. “I think it was weighing the weather, the facility and how it plays, and the resources they have within it, and having that alternative. The players ultimately felt that was the best timing and the best decision.”

Once the jump to Buffalo is complete, the Jays will then simply sit and wait for the green light to return to Toronto.

When that will be, or even could be, is a complete unknown with all the variables at play and the border still closed, but the club is still holding out hope that there could be some momentum post-all-star break, even if a late August or September return is a little bit more realistic.

Up to this point, combining Buffalo and Dunedin, the Jays have managed to go 24-13 at “home” since the pandemic started.​