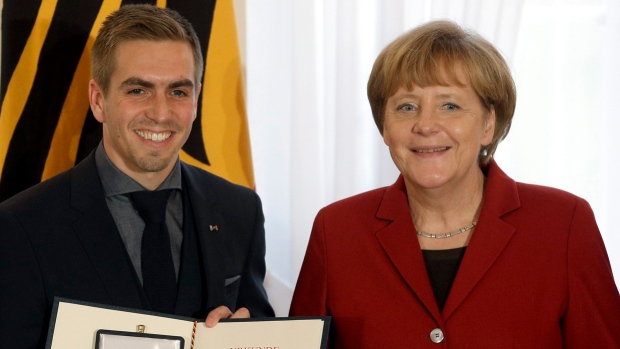 BERLIN - The president of Germany has decorated the World Cup-winning squad with the country's highest honour for sports, rewarding what he called a "convincing performance that is recognized ungrudgingly by all its opponents."

President Joachim Gauck, joined by Chancellor Angela Merkel, presented the players with the Silver Laurel Leaf in a ceremony at the head of state's Bellevue Palace.

Speaking a day after the 25th anniversary of the fall of the Berlin Wall, Gauck noted that Germany's fourth World Cup is its first as a reunited nation. West Germany won the title shortly before reunification in 1990.

World Cup-winning captain Philipp Lahm, who retired from the national team after the tournament, thanked Gauck and Merkel for their support. Both travelled to the World Cup and visited the Germany dressing room.