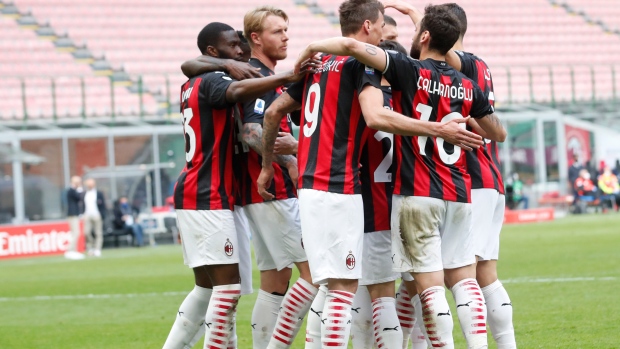 ROME — Forget about extending its record run of nine straight Serie A titles.

At this rate, Juventus may not even qualify for the Champions League.

The defeat came on a day of reports that Juventus is part of a group of European heavyweights renewing threats to walk away from the Champions League and create a Super League.

Juventus dropped to fourth — which carries the final Champions League berth — two points behind Atalanta and had its advantage over fifth-place Napoli cut to two points after Napoli held Italian leader Inter Milan to a 1-1 draw.

“We have to focus only on ourselves," Juventus coach Andrea Pirlo said. "I am convinced there will be no problem achieving our objective.”

Juventus has won only one of its last four matches and lost twice in that span — with the other defeat coming at home against promoted Benevento last month.

What’s more, Atalanta now also holds the advantage over Juventus if a tiebreaker is needed. Head-to-head records are the first criteria used in Italy and the teams drew 1-1 in December.

Juventus was missing an injured Cristiano Ronaldo and produced few chances in Bergamo before Malinovskyi’s shot in the 87th minute took a major deflection off Alex Sandro and sent goalkeeper Wojciech Szczesny the wrong way.

“They were lucky with the late goal,” Pirlo said. “It’s disappointing. We could have brought home at least a point.”

It marked Atalanta’s first victory over Juventus in Serie A in more than two decades — since Feb. 2001.

It was just the latest in a series of exploits from Atalanta, which reached the quarterfinals of last season’s Champions League.

“This win means we can beat them,” Atalanta coach Gian Piero Gasperini said. “The victory is justified and we are proud of it.”

Juventus has failed to win all four Serie A matches that Ronaldo has missed this season, including two when he had the coronavirus and another when he was rested.

“It’s no coincidence Ronaldo scored 25 goals this season and he was excellent in the first leg with Atalanta, too," Pirlo said. "He's suited for these games and is our main finisher. When missing the killer instinct in the box, it’s slightly different.

“We still created our chances today, though, so I don’t think it made that much difference.”

Inter’s 11-match winning streak ended with a draw at the Diego Armando Maradona stadium, where Napoli went ahead following an own-goal from goalkeeper Samir Handanovic.

Christian Eriksen equalized after the break for Inter with a booming effort from long-distance.

With Zlatan Ibrahimovic suspended, an own-goal from highly touted Genoa striker Gianluca Scamacca proved the winner for Milan in a 2-1 victory.

Milan’s first home win in more than two months made sure the Rossoneri held onto second place.

Scamacca turned away when a corner kick sailed over the head of Mario Mandzukic and the ball ricocheted off his back and into Genoa's goal.

Ante Rebic had put Milan ahead early with a long-range half volley.

Mattia Destro then equalized for Genoa with a header following poor defending from Fikayo Tomori.

Lazio also got two own-goals in a 5-3 win over Benevento for its fifth straight victory, moving the sixth-place Roman club within four points of Juventus.

Lazio coach Simone Inzaghi missed the game against his brother and coaching counterpart Filippo Inzaghi with the coronavirus.

Ciro Immobile scored twice — the first was his 150th in Serie A — and Joaquin Correa converted a penalty for Lazio, which also got own-goals from Fabio Depaoli and Lorenzo Montipo.

Relegation-threatened Torino came back from a goal down for a 3-1 win over Roma, which on Thursday advanced to the Europa League semifinals.