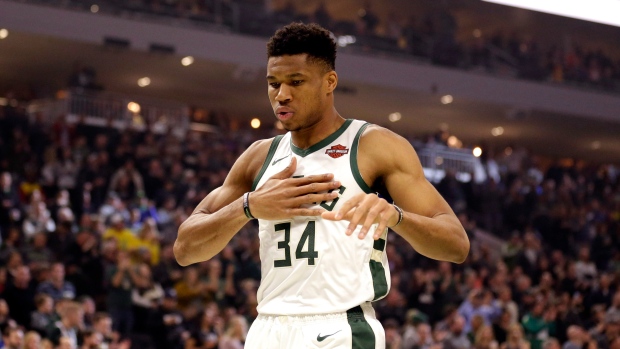 The NBA's Christmas benchmark remains three weeks away yet two of the better teams from each conference will get a chance to see how they measure up when standing side by side.

The Eastern Conference-leading Milwaukee Bucks will bring a 13-game winning streak into a home matchup Friday against the Los Angeles Clippers, who reside in second place in the West. The Clippers have nine victories in their last 10 games.

Christmas typically is the season's unofficial starting line when teams can begin digging in their heels for the four-month grind toward the regular-season finish line. The Bucks and Clippers are fairly certain of their regular-season destiny. They are expected to be title contenders when the playoffs arrive.

The Bucks are getting it done behind Giannis Antetokounmpo again, with the reigning NBA Most Valuable Player averaging 31.0 points per game and 13.2 rebounds. He had 35 points and nine rebounds in Milwaukee's 127-103 cakewalk over the Detroit Pistons on Wednesday, his 13th game of at least 30 points this season.

After the Bucks defeated the Pistons eight times last season, including in the playoffs, Wednesday's game was a physical affair with six technical fouls. It does not figure to be as chippy against the Clippers, even in a matchup of top players like Antetokounmpo and the Clippers' Kawhi Leonard.

"There's going to be a lot of teams that are going to come out and try to be physical with me, try to hit me, knock me down to the floor," Antetokounmpo said after the game. "I've just got to keep my composure. I think I have great teammates that always talk to me and tell me, 'Stay focused. Stay in the game.'"

The last time the Bucks won this many games in succession was the 1973-74 season, when they advanced to the NBA Finals.

Milwaukee has not lost since a Nov. 8 stumble at Utah. That game came immediately after the Bucks earned a 129-124 victory at Los Angeles against the Clippers.

Antetokounmpo had 38 points and 16 rebounds in that one, but the Clippers hung in until the end without Leonard, who received a day of rest on the second night of back-to-back games. And Paul George had not played yet as he recovered from off-season shoulder surgery.

Leonard will be fully rested for this one after the Clippers earned a 117-97 victory over the Portland Trail Blazers on Tuesday. And George is now in the fold, making his season debut midway through November.

Leonard scored just 11 points on 3-for-15 shooting against the Blazers, but George finished with 25 points -- highlighted by making 6 of 7 shots from 3-point range.

"The best part of this team, in my opinion, is that we're not near where we're going to be," head coach Doc Rivers said, according to the Los Angeles Times. "And you can feel that. Our guys know that. They know that we're playing winning basketball.

"We're playing together, we're playing hard, we're talking, but they also know we don't have it together yet. They know that. They can feel that."