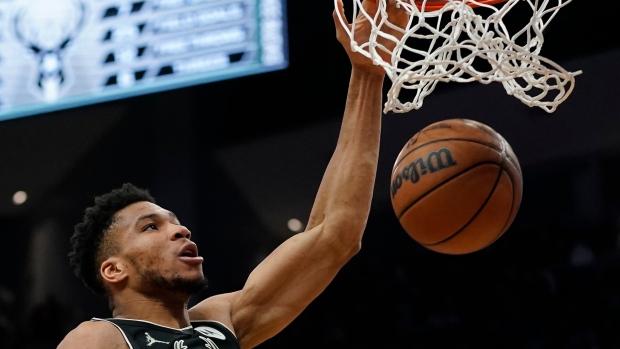 Chicago’s DeMar DeRozan scored 35 points but missed a 3-pointer that would have put the Bulls ahead with 23 seconds left. Milwaukee’s Khris Middleton made two free throws with 15.8 seconds remaining to close out the scoring.

Allen was ejected midway through the third quarter for a flagrant foul 2 against Alex Caruso, who was driving to the basket. The play was originally ruled a common shooting foul but got upgraded to a flagrant 2 after a replay review.

Caruso landed on his right side and remained on the floor under the basket for a couple of minutes. He stayed in the game to attempt his free throws, though he missed both tries.

Chicago was playing a fourth straight game without either Ball or Zach LaVine, who has a sore left knee that will prevent him from joining the Bulls for the final two games in this road trip as well. The Bulls have gone 1-3 in those four games.

But the Bulls still nearly pulled it out.

DeRozan hit a jumper to put the Bulls ahead 67-66 in the last minute of the third quarter. The Bulls grabbed a four-point lead early in the final period, but the Bucks responded and moved ahead for good on an Antetokounmpo free throw with 7:24 left.

Middleton had 16 points and 11 rebounds for the Bucks, while Bobby Portis added 12 points and 13 rebounds. Jrue Holiday scored 13 poinots.

Nikola Vucevic had 19 points and 11 rebounds for the Bulls. Matt Thomas added 11 points and went 3 of 5 on 3-point attempts.

Bulls: Ball is expected to undergo surgery sometime next week, Bulls coach Billy Donovan said. “I don’t have the exact date as of yet,” Donovan said before the game. “I think they wanted to at least let a week go by to let him do some strengthening in preparation before he goes in.” Ball is expected to require 6 to 8 weeks of recovery after his surgery. ... Donovan said LaVine has responded well to his treatment but doesn’t have an exact return date for him in mind. “We’re optimistic for sometime maybe middle to late next week if things continue to trend the way they are,” Donovan said. ... Tyler Cook made just his second career start. His only other start came with the Detroit Pistons last season. He had four points and five fouls in 26 minutes.

Bucks: Jrue Holiday came off the bench for a second straight game as the Bucks continue to monitor his minutes. Holiday returned to action Wednesday against Memphis after missing five games with a sore left ankle. ... The Bucks are 18-3 when they have Antetokounmpo, Holiday and Middleton all on the floor.

Bucks: Host the Sacramento Kings on Saturday. The Bucks have won their last 10 meetings with the Kings and haven’t lost to them since Feb. 1, 2016.