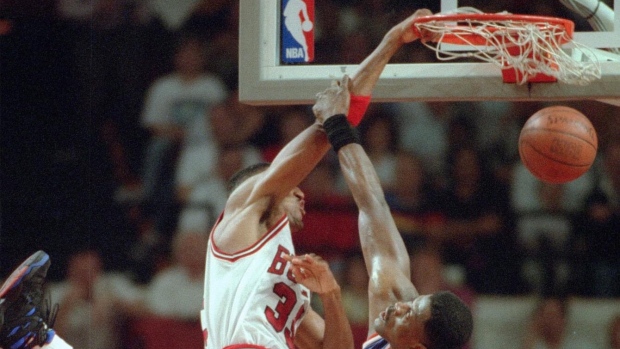 The book, which measures at 14” x 19” and weighs over 9 pounds, is the first to ever exclusively showcase dunks and is the largest basketball photography book. POSTERIZED covers some of the most wicked slams in the history of the sport in its oversized format.

A huge debt of gratitude to the incomparable @ScottStrazzante who provided his iconic photo - of the legendary Pippin on Ewing poster dunk - for our Kickstarter cover mock up!! 🏀🤟💕 pic.twitter.com/p2CgUN5BpX

The book includes stories, anecdotes and interviews from some of the NBA’s biggest stars, both past and present, sports historians, photographers and fans who bore witness to some of the most electric moments in basketball’s history. The cover itself features Scottie Pippin dunking on Patrick Ewing before taunting Spike Lee in the infamous game 6 of the 1994 Eastern Conference semifinals.

Having received consent and participation from the NBA and legendary sports photographers such as Andy Bernstein and Nat Butler, POSTERIZED contains 150 high-quality, historic photos including moments never before seen in print, allowing fans to flip through decades of legendary slams across all eras of basketball history.

Dunkers in the present featured in the book include Giannis Antetokounmpo, DeMar DeRozan, Anthony Davis, Kevin Durant, Joel Embiid and LeBron James while retired legends such as Pippen, Michael Jordan, Shaquille O’Neal, Kareem Abdul-Jabbar, Allen Iverson, Hakeem Olajuwon and many more have some of their most iconic moments documented.

POSTERIZED is available for preorder for $275 USD at the Kickstarter website.