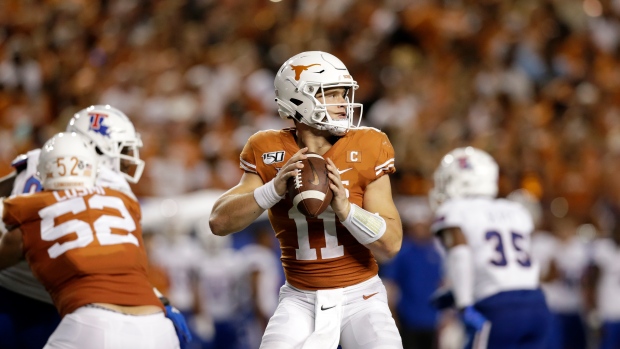 Wait, is Texas back?

There have been numerous false dawns when it comes to the return of the Texas Longhorns over the past decade, but this edition of the team might be the one that finally returns one of college football’s most storied programs back to prominence.

We might know sooner than later because Tom Herman’s No. 9-ranked team faces a stiff test in Week 2 as the Longhorns welcome No.6 LSU to Joe Jamail Field in Austin with both teams coming off opening night victories. Texas hammered Louisiana Tech, 45-14, while Ed Orgeron’s Tigers were 55-3 victors in a rout of Georgia Southern.

It’s been 10 years now since the Longhorns have been in a national title game and 14 years since they’ve won one. But the days of Mack Brown seem like eons ago and Herman took a big first step in righting the ship last year in his second season in charge of the program following the disappointing tenure of Charlie Strong.

Yet even as the Texas of old began to emerge last season, there still remained the troubling vestiges of more recent Longhorns teams.

The season began with a thud as the Longhorns fell to Maryland in Week 1, 34-29, sending the shame shudders up the spine of fans that had now become commonplace over the past several seasons. Last year was different, though, as the Longhorns bounced back with six straight wins, including a 48-45 victory over Big 12 archrivals Oklahoma. The Sooners would eventually get the last laugh in the conference though as Kyler Murray led Oklahoma to the College Football Playoffs with a 39-27 win over the Longhorns in the Big 12 title game. Still, the Longhorns’ season would end on a high note with a 28-21 upset of Georgia in the Sugar Bowl, its first New Year’s Six bowl victory since 2008, and its 10th victory, the first time the program reached double-digits in wins for first time since 2009.

With the national spotlight on this high-profile clash, Sam Ehrlinger has the platform to prove that he’s the next great Longhorns quarterback to carry the mantle of Vince Young and Colt McCoy. The 20-year-old junior starred in Week 1, carving up the Louisiana Tech defence with 276 yards and four touchdowns on 28-for-38 passing. The hometown boy who broke the high school football records of Drew Brees and Nick Foles will now do battle with a skilled Tigers defence and defensive lineman Rashard Lawrence.

“He’s more of a situational guy,” Lawrence said of playing against Ehrlinger to Sheldon Mickles of The Advocate. “They’re not going to run him 30 times like some teams do. He’s a situational guy, so we're going to have to be on our technique and fundamentals to really stop him.”

Ehrlinger will also be tested by a staunch LSU secondary led by prospective 2020 top-10 pick, safety Grant Delpit. The winner of the 2018 Jack Tatum Award, given to the nation’s top defensive back and previously won by the likes of Charles Woodson, Eric Berry and Patrick Peterson, Delpit was a force to be reckoned with in his first two seasons at LSU, posting five sacks, six interceptions and 138 tackles.

On the other sideline, Tigers QB and Heisman hopeful Joe Burrow is no stranger to Herman. The son of former CFL QB Jimmy Burrow, the younger Burrow was recruited to Ohio State in 2014 largely in part by Herman, who was Urban Meyer’s offensive coordinator at the time.

“I thought he was a fierce competitor,” Herman said of what he saw in Burrow to Shea Dixon of 247 Sports. “He has a very cerebral understanding of the game. Overall, just a really, really tough, competitive kid.”

The two never did link up in Columbus, though, as Herman left that spring to take the reins at Houston. Burrow spent three years with the Buckeyes as a backup to J.T. Barrett, appearing in 10 games, before transferring to Baton Rouge in the spring of 2018. As a junior last season with the Fiesta Bowl-winning Tigers, Burrow threw for 2,894 yards on 219-for-379 passing and 16 touchdowns to five picks. He picked up right where he left off against Georgia State last weekend, throwing for 278 yards and five TDs.

Burrow praised Herman ahead of the matchup.

While the mutual admiration society between the two teams is in full effect in the leadup to the game, that will change when the Longhorns and Tigers hit the field on Saturday night with both programs harbouring CFP hopes. Both teams are well aware that a loss here will seriously derail one of the two teams’ fortunes going forward.

Saturday will mark the 18 meeting between the programs and first in non-bowl play since 1954. The Longhorns hold a 9-7-1 edge. When they last played, the Longhorns were victorious in the 2003 Cotton Bowl by a score of 35-20 with Texas wide receiver Roy Williams named MVP.