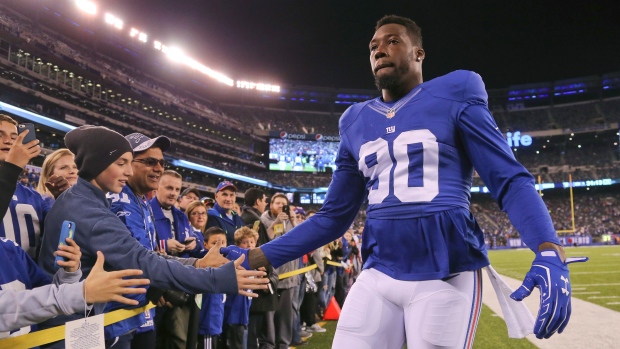 EAST RUTHERFORD, N.J. — The New York Giants won't be able to replace defensive end Jason Pierre-Paul in the final four games of the regular season. The 27-year-old just does too much for one guy to step in. He stops the run.

Pierre-Paul pressures the quarterback. He also has a unique ability to make plays in situations when he seemingly was out of position.

The Giants (8-4) are going to be missing that talent for the rest of the regular season with news that Pierre-Paul had surgery Wednesday to repair a sports hernia.

The prognosis is for him to be out four to six weeks, which means a season in which he was in the running for Comeback Player of the Year will be over before he recovers.

With Dallas, Detroit, Philadelphia and Washington left on the schedule, safety Landon Collins has other plans.

The Giants currently have the best record in the race for a wild-card berth and they want to stay there and end the franchise's four-year playoff drought.

"We know if we keep playing the way we are playing and keep winning these games, he is going to be back and on the field with us," Collins said of Pierre-Paul. "If we play like we are down and not come with it all, he is going to be down even more because we are not going to be in the playoffs."

Pierre-Paul was injured in the second quarter of Sunday's loss to the Steelers. He was evaluated by team doctors Monday, and Tuesday went to Philadelphia to see surgeon William C. Meyers — a specialist in core muscle injuries — for a second opinion.

Pierre-Paul tweeted Wednesday that he was feeling well after the surgery.

Tackle Jay Bromley said losing Pierre-Paul is tough, not only because of his play but his personality and leadership.

"I have never seen anyone like him on the football field, a player that moves the way he does and creates havoc the way he does, " Bromley said. "He was special because he could improvise."

After struggling last season following a July 4 fireworks accident that mangled his right hand, Pierre-Paul was starting to show signs he was returning to the form that made him one of the league's top defensive ends. He had 53 tackles, seven sacks, three forced fumbles and a fumble return for a touchdown against the Browns on Nov. 27. He had 5 1/2 sacks of his total in consecutive games against the Bears and Browns.

"You don't know how much of an impact a guy has on a team, on and off the field, until they are not there anymore, and I know how bad he wants to play," defensive tackle Damon Harrison said. "I know how much being out there this year meant to him and I was a little heartbroken for him."

Okwara, who has played in every game this season, said his goal is simple: be prepared for the Cowboys (11-1).

"You can't replace JPP, he is a very special player," said Okwara, who made the Giants as a free agent out of Notre Dame. "I am just going to go out there and make sure the guys around me trust me that I am going to do my job, and just perform."

Odighizuwa, who missed last week with a knee injury, expects to play and follow some of the things he has learned from Pierre-Paul.

Starting defensive tackle Johnathan Hankins did not practice Wednesday because of a quad injury, but insists he will play in the rematch against the Cowboys. New York is the only team to beat Dallas this season.