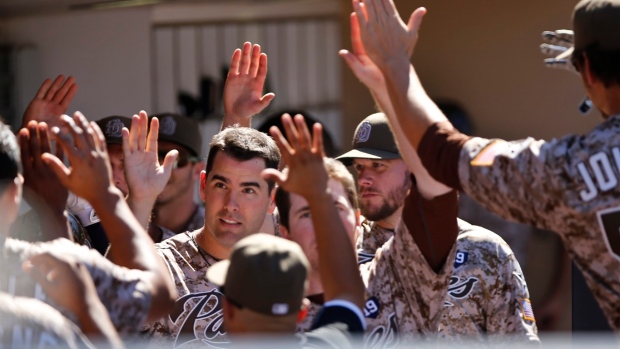 SAN DIEGO - The San Francisco Giants are reeling, having lost six of eight games, a streak in which they've scored only 14 runs.

And yet they're still inching toward a playoff berth, thanks to the fact there are two wild-card spots.

The Giants managed just six hits off Ian Kennedy and three relievers, losing 8-2 to the San Diego Padres on Sunday to fall 4 1/2 games behind the Los Angeles Dodgers in the NL West race.

"It's definitely not ideal. But the bottom line is we need to win some games," losing pitcher Ryan Vogelsong said. "Everybody knows what we're playing for and everybody knows what's at stake. You prepare the best you can and go out and see what happens."

The Giants' chances of winning the division were dealt a serious blow by the three-game sweep at the hands of the lowly Padres. The Giants open a three-game series at Dodger Stadium on Monday night.

San Francisco is still in good shape to clinch a wild-card berth, although it dropped into a tie with Pittsburgh in the race for the top spot. The Giants and Pirates are 4 1/2 games ahead of Milwaukee. The Giants' magic number for clinching a wild-card spot is three.

The division is "still there until they clinch, as far as I'm concerned," Vogelsong said. "Until their magic number is zero, there's still a shot. WE need to go in there and play well and have some things go our way."

Yasmani Grandal had three RBIs while Rene Rivera and Cameron Maybin each drove in two runs for the Padres, who improved to 9-6 against the Giants this year. The teams will finish the season with a four-game series in San Francisco starting Thursday night.

Kennedy (12-13) struck out five, giving him a career-high 201 and making him the fourth Padres pitcher to fan 200 in a season. He held the Giants to two runs and five hits in 6 2-3 innings, with one walk.

Kennedy retired the first 11 Giants before Buster Posey beat out an infield single.

"We ran into three really good pitchers who were on top of their game," Giants manager Bruce Bochy said. "You've still got to find a way."

"It was a good series," manager Bud Black said. "I thought we played really sound baseball. We pitched really well from Despaigne to Cash to Ian. We had a leg up there. The key was the starting pitching."

Vogelsong (8-12) held the Padres hitless until Seth Smith doubled into the gap in right-centre leading off the fifth. Smith advanced on Rivera's single to left and scored on Amarista's sacrifice fly.

The Padres piled on in the sixth with four runs, three unearned, off three pitchers.

Grandal hit a two-run double in the seventh.

Vogelsong allowed four runs, two earned, in five innings while striking out five and walking one.

Giants rookie Chris Dominguez hit a two-run homer to left off Kennedy with two outs in the seventh for his first career big league hit. He was called up from Triple-A Fresno on Sept. 1. Brandon Crawford was aboard on a single.

Dominguez's got his home run ball back, with a little extra. An 8-year-old girl celebrating her birthday ended up with it, and her sister wrote "Happy Birthday" on it. "That's all right. It's a good memory," Dominguez said.

All he had to trade for the keepsake was another ball.

Giants: Bochy said it's doubtful that CF Angel Pagan and INF-OF Michael Morse will be able to play in the Dodgers series. Pagan has a bulging disc in his back and will be examined again on Monday. Bochy said Morse likely will go to San Francisco to get an MRI on his strained side muscle.

Padres: Black isn't sure if RHP Tyson Ross will make another start this season due to a sore right arm. Ross last pitched on Sept. 13.