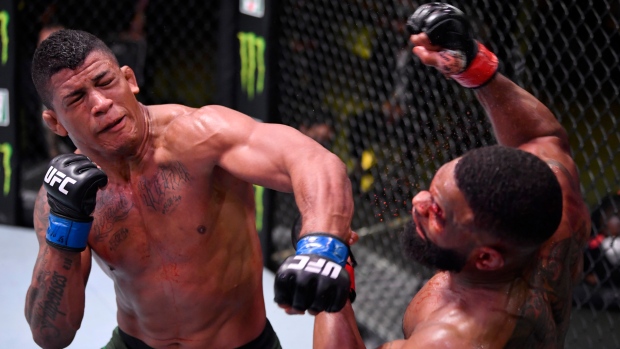 After a rapid rise through the UFC’s welterweight division and a few aborted attempts at the booking, No. 2-ranked contender Gilbert Burns will finally get his shot at champion Kamaru Usman at UFC 258 on Feb. 13.

The pair were originally slated to fight at UFC 251 in July before COVID-19 related issues forced Burns to pull out. They were then reportedly going to meet at UFC 256 before the champion had to withdraw.

Though they have yet to go head-to-head in a UFC Octagon, the two fighters are very familiar with each other outside of the cage.

Burns and Usman are former training partners and worked together before Burns moved up from the lightweight division and started making his ascent up the welterweight rankings. Just how much do the main event combatants know about each other’s style? According to Burns, just about everything and he thinks that will make for a very exciting contest.

“I know a lot about Kamaru, he knows a lot about me, but still, if the fight goes halfway like what we did in our sparring sessions, people are going to be so happy watching that fight because we used to get after each other a lot and making each other better.”

Burns is riding a six-fight winning streak that includes a victory over noted nice guy Demian Maia, so he’s no stranger to fights that have no animosity involved. When it comes to former teammate Usman and fights that aren’t fuelled by anger, Burns says trying to have his hand raised is all the motivation he needs.

“When it goes inside of the cage, I come with a strategy, I come with a mission to finish the fight or dominate the fight,” said Burns. “I have no feelings, I have no hate, I don’t need to hate the guy. I have a lot of respect, but I have to put that aside, I’m on a mission, I want to win the fight and I want to give my best. He’s in the way right now, he’s the one that I’m going to face and there’s no bad blood, but it’s a competition and in competition, sometime you have to face those guys. May the best man win and I’ll keep respecting him. Easier said than done, but I believe I’ll keep respecting Kamaru for sure, maybe even more after the fight.”

As for what the welterweight champion does best, Burns says it’s about the way he runs the show inside the Octagon, fighting his type of fight.

“He controls the distance better, he keeps out of danger better than me, I put myself more in danger because I believe in my power and my speed and so sometimes I put myself in these positions,” said Burns. “He does better controlling the cage, going at his own pace, he wrestles very good offensively, cage control is good, a lot of things he does very good.

“Even though people think he doesn’t strike that good, I think he strikes very good. When he gets in space, he’s able to strike, he can kick, he does a couple good body shots, he can do a lot of things very good.”

Though he respects his opponents’ wrestling skills, Burns believes that his jiu-jitsu makes him a nightmare on the mat and invites the champion or anyone else in the welterweight division to try to get him on the ground.

There were calls for Burns to lose his place in line after he was forced out of the UFC 251 title shot that eventually went to Jorge Masvidal on Fight Island, but Burns says he wasn’t gifted anything and doesn’t really care what anyone else thinks about him main eventing UFC 258.

“I worked hard for this and I earned this, nothing in my life was ever given to me, nothing,” said Burns. “Everything was through hard work, nothing in my life was easy. I remember from the jiu-jitsu I got a scholarship, because I didn’t have money to pay and that’s how I started training jiu-jitsu. If I wasn’t there early, before the class helping clean up the gym, I couldn’t train, nothing was given to me, especially those opportunities, I earned them.”

“I knocked Demian Maia out, I dominated Tyron Woodley, I asked for the shot and they gave it to me and it wasn’t given because I’m a nice guy, it was because of my performance. It doesn’t make me sad that people have different opinions, but the way I see it, your opinion is not going to change my reality.”