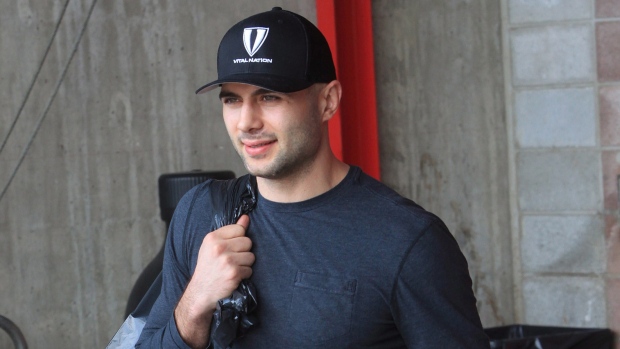 It’s been a couple of weeks since the Seattle Kraken chose Calgary Flames blueliner Mark Giordano in the Expansion Draft. The longtime defenceman spent nearly two decades as a Flame, including the last eight years as the team’s captain.

TSN caught up with the 37-year-old Giordano on Friday to talk about his new team and the legacy he leaves behind in Calgary.

“Obviously, it was a pretty crazy 24 hours. I found out that Seattle had selected me the night before so I got on a plane that morning. Obviously a lot of emotions, a lot of feelings going through my head, thinking of the great times that I had in Calgary and then heading to Seattle and the draft and seeing the city. It was a cool experience down there, too. It was a fast-paced, pretty crazy 24 hours but I’m happy I went down and checked out the city and facilities and all that in Seattle. Now I’ve gotten around that and am looking forward to a new experience and a new season.”

Q: Brad Treliving, the Calgary Flames general manager, said that at times it was you consoling him during this process. What were those conversations like with the Flames, both in the leadup to the Expansion Draft and then after you had been officially chosen by the Kraken?

“Me and Tre obviously have a great relationship and we’ve been working together for obviously a long time. We just had some honest conversations both ways. Up until you are selected, I was a Calgary Flame and trying to talk about what was going on with me and things with our team. After you’ve played somewhere for as long as I did and you get selected to an expansion team in Seattle, it was a lot of different feelings going through your mind at the time. But I got down to Seattle, met the great ownership group, management, coaches and some of the players. Now, like I said, I got my head around that and am looking forward to a great year in Seattle. It seems like a great opportunity for all of us.”

Q: It seems like you’ve done a lot there already. What have your first couple of weeks with the Kraken been like?

“Yeah. I think the main thing for all us players going to Seattle is that it’s obviously a new city in the NHL and we’re all in the same boat. We’re all trying to find a place to live. For myself, trying to set my family up in the city. After all that’s done, head out there for the season. I’m really looking forward to focusing on game one against Vegas and going from there. A lot of different emotions over the past couple of weeks but a really exciting time and a new chapter for my family. I’ve got to look at all the positives now and move forward.”

Q: At the Seattle Mariners game, (Kracken teammate) Brandon Tanev called you the team’s leader. Have you thought about being a part of a new NHL franchise and does that get you excited, knowing that you could play such a pivotal role for a new team?

Q: Looking back on your run in Calgary, you’re going to be considered one of this franchise’s best players. Have you wrapped your head around Calgary and can you talk about some of the memories you had playing as long as you did for this franchise?

“I have, I really have. I think initially when you’ve played somewhere your whole career, there’s going to be a little shock factor for the first couple of days, but I’ve turned the page. I’m back visiting family in Toronto and looking forward to the upcoming season and having a good year. When I think about Calgary, there’s so many different memories that come to mind. I just think about so many different relationships I’ve developed in that city. I’ve played with guys who have grown into my best friends over the years. I think of guys like Matt Stajan, Sean Monahan, TJ Brodie, Milan Lucic who have become great friends. I should be mentioning a lot more because there are a lot more, just the relationships I’ve developed in that city over the years.”

Q: Your legacy. I know you and your family have done a lot for the community over the years. Have you started to think about how you’ll be remembered by the fans and organization?

Q: And lastly, what’s the thing you’ll miss the most about the Calgary Flames or the city of Calgary?

“Just going to the rink and spending time with the guys. That’s the thing I don’t take for granted. Especially as you get older, you realize that you don’t have as many years left. Sometimes it’s tough to think about not being able to walk into the rink and hang out with the guys, going to dinners and stuff with guys on the road. That’s something that a lot of us enjoy and that’s the part I’ll miss the most in Calgary. I don’t take any of that for granted.