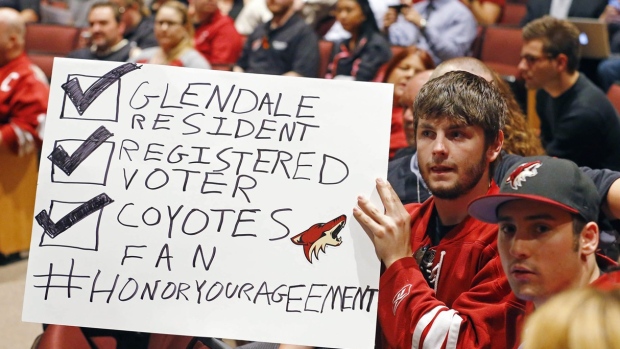 GLENDALE, Ariz. - The city of Glendale says it's willing to renegotiate an arena lease for the NHL's Arizona Coyotes, but stands by its conflict-of-interest reasoning for cancelling it in the first place.

"Let's be clear. This isn't about hockey," Glendale Interim Assistant City Manager Tom Duensing said after the City Council held an executive session Tuesday. "We want the Arizona Coyotes in Glendale and we want to see them succeed. As we've consistently indicated to the team, we are prepared to negotiate a mutually beneficial approach to address concerns.

"This issue is about the law and the process to ensure the law is followed. We have an obligation to the law and to the citizens first," Duensing added. "We continue to believe in the strength of our case which is rooted in facts. Over time, those facts will come out. But they'll only come out in the appropriate venue, and that's a court of law."

In a brief statement, the Coyotes' ownership group said it plans to honour the arena lease signed in 2013 and expects the city to do the same.

Last week, the City Council voted to terminate the 15-year, $225 million agreement with the Coyotes, citing a conflict-of-interest law involving two ex-Glendale employees leaving to go to work for the team.

A Maricopa County Superior Court judge on Friday granted the Coyotes' request for a temporary injunction to keep Glendale from dissolving the arena lease agreement.

The ordeal has intensified relocation speculation for the team with a long list of potential suitors waiting in the wings, including Seattle; Portland, Oregon; and Las Vegas. One overture has already come from across town.

If the Coyotes eventually lose their bid to stay in Glendale, the city of Phoenix is already laying the groundwork for the team to move back to the downtown arena where the NBA's Phoenix Suns play.

The Coyotes played there after moving to Arizona in 1996 from Winnipeg, Manitoba. The Glendale arena opened in 2003.