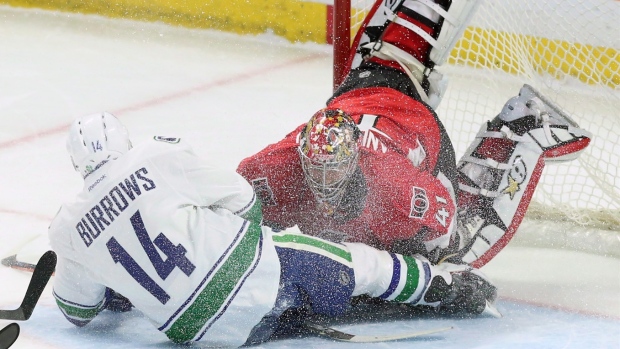 Goalie interference, which has quickly become the most talked about rule in hockey, is expected to be a focus when NHL general managers meet in Florida beginning Monday.

Coaches were given the option to challenge for goalie interference this season if they had their timeout, with referees looking at a video monitor while communicating with the league's hockey operations department.

But with the on-ice officials getting the final say in the heat of the moment, there have been a number of head-scratching decisions.

Pittsburgh's Mike Sullivan was one of the more recent coaches left fuming when a goal by Penguins defenceman Brian Dumoulin was waved off by the referee on the ice off after it was judged the player made contact with Maple Leafs netminder Frederik Andersen before scoring last weekend.

To make matters worse, Dumoulin was assessed a penalty on the play when he brushed by Andersen — meaning the sequence couldn't be reviewed — with the Maple Leafs converting on the man advantage.

"It's a huge issue," Sullivan said of goalie interference at the time. "It's been discussed all year long. It's seems like every week this issue gets raised. It's a challenge that the league has to try and iron out. I know it's being discussed. Everybody's got to do their best to try and clarify the language and clarify the criteria.

"I don't think anybody really knows what's goalie interference and what isn't."

GMs will be looking for some of that clarity at their meetings that run Monday to Wednesday in Boca Raton, Fla., with the start of the playoffs just over three weeks away.