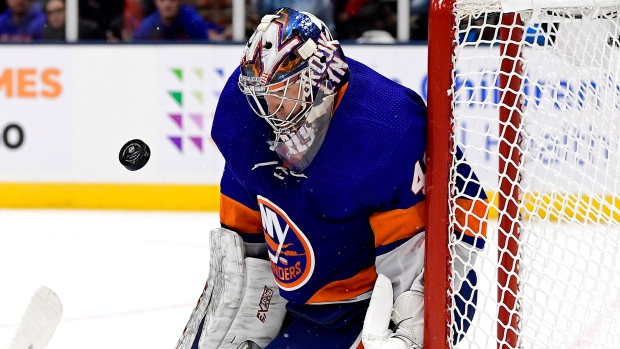 One of the most fascinating debates of the 2019-20 season has been: Just how good are the New York Islanders?

At 27-12-3 (57 points), the Islanders are well situated to lock down one of the eight playoff spots in the Eastern Conference. If it weren’t for the surging Washington Capitals (30-10-5) residing in the same division, we might be talking seriously about the possibility of the Islanders winning the Metropolitan. Head coach Barry Trotz has his team firing on all cylinders.

What’s interesting about the Islanders is how much of a statistical outlier they are relative to their peers. The Islanders, unlike most other teams comfortably situated in a playoff position, are outchanced and outshot on most nights.

At even strength this year, the Islanders are 30th in Corsi% (46.3 per cent), 26th in scoring chances (47.2 per cent), and 25th in expected goals (48.2 per cent). The power play is ranked 20th in the league (6.4 goals per 60 minutes), and the penalty kill is 21st in the league in goals against (6.5). The team’s leading scorer – 22-year-old Mathew Barzal – has 35 points, which would put him in a tie for 52nd best in the league, matched with the likes of Blues defenceman Alex Pietrangelo and Sabres rookie Victor Olofsson.

In many ways, it’s hard to see how the Islanders aren’t in the lottery hunt. But goaltending is the great equalizer in the modern era of hockey, and no team has received more from their men in the crease than the Islanders. Semyon Varlamov (92.4 save percentage) is on the short list of goalies deserving of Vezina Trophy recognition, and Thomas Greiss (91.9 save percentage) is probably the best backup in the league. For Trotz and the Islanders, the two netminders have been – time and time again – the great equalizer when the ice starts to tilt in the opposition’s favour.

I do find it interesting that we are living through another year of Trotz getting strong goaltending. Trotz was on the right side of the goaltending battle on most nights in Nashville, at least until an ill-fated 2013-14 season where the play of Carter Hutton, Pekka Rinne, and Marek Mazanec bizarrely fell off a cliff.

When Trotz went to Washington, goaltending expert Mitch Korn followed. When Trotz left Washington, so too did Korn, reuniting with him in Long Island. Since joining the Capitals in 2014-15, a common theme around Trotz is that his teams simply stop pucks better than their opponents – in most cases, considerably so.

If you just considered team save percentage over those six years, Trotz’s teams have stopped 91.7 per cent of shots in all situations. The Anaheim Ducks, the team with the second best save percentage, came in at 91.3 per cent. That’s a significant gap, and a far cry from the league average of 90.8 per cent. But save percentage wouldn’t be considerate of how shot quality impact stop rates. Perhaps Trotz’s teams faced more shots from the perimeter or the blueline, as one example? We would want to adjust for those things.

So let’s consider Trotz’s goaltending from a different perspective. What if we looked at each goaltender’s Goals Above Replacement value over the last six seasons and compared Trotz’s goalies against goalies around the league, this time adjusted for context? The short answer is we reach the same finding – Trotz’s goaltending tandems have been exceptional relative to the rest of the league: 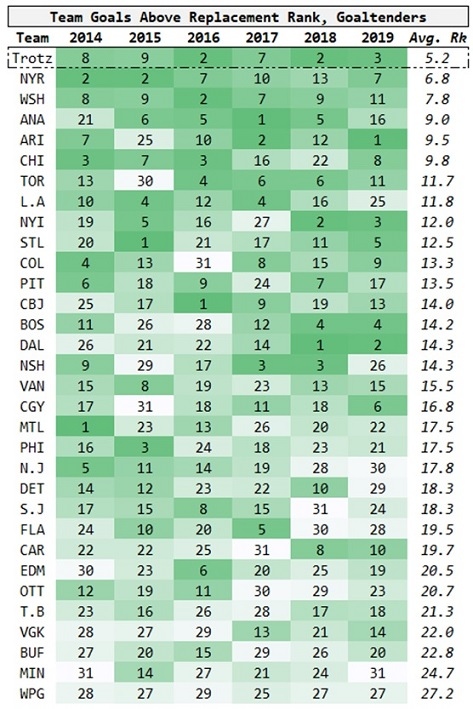 I don’t think the conclusion here is that Trotz and Korn (and Islanders’ goalie coach Piero Greco, who should be mentioned as well) are goaltender whisperers, and it’s certainly worth noting that this coaching staff may have been uniquely blessed with high-quality goaltenders falling into their lap. Semyon Varlamov has been fantastic for most of his career, and the same is true for Braden Holtby. From a backup perspective, you can do a heck of a lot worse than Philipp Grubauer, Robin Lehner and Thomas Greiss.

But it’s not as if these goaltenders haven’t struggled at points of their career. Holtby is barely stopping 90 per cent of shots this season under head coach Todd Reirden, and Varlamov had two seasons in Colorado where his save percentages cratered. And to credit the goaltenders exclusively for the high performance numbers would ignore the fact that Trotz’s skaters appear quite good at pushing shooters out of the slot and forcing the puck back to the blueline, where shooting percentages are generally extremely low: 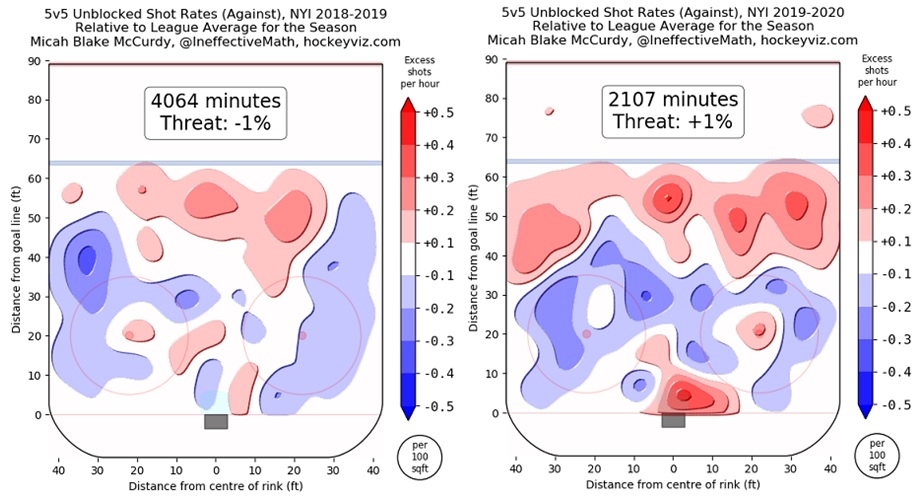 I won’t sit here and tell you that I think the Islanders are as good as their record indicates. We have repeatedly seen teams on the wrong side of the possession battle eventually give way to more puck-dominant teams, and the Islanders are a flawed team to that extent.

But, once again, Trotz is getting a lot from his goaltenders – certainly enough to push Long Island’s team into a playoff spot, and maybe even enough to make some noise come April.