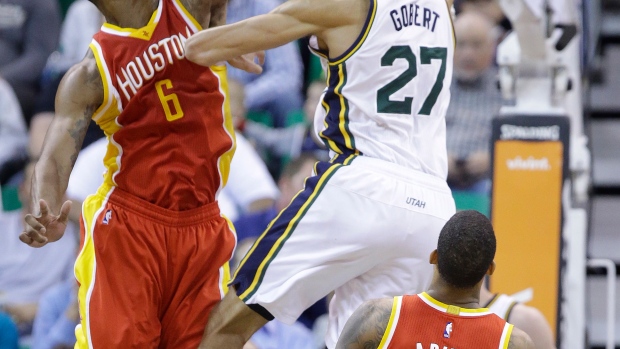 SALT LAKE CITY - Rudy Gobert caught a pass from Gordon Hayward midway through the second quarter, went up with the ball cocked in one hand and threw down a dunk on top of Houston forward Terrence Jones. The 7-foot Frenchman turned to the bench and gave a salute as he ran back on defence with the crowd erupting.

The sequence summed up the entire night with Gobert doing whatever he wanted in the Utah Jazz's 109-91 runaway victory over the Rockets on Thursday night.

"It's just in the moment, sometimes I feel I have to salute my teammates," Gobert said, smiling.

Gobert met little resistance on both sides of the floor as he put up a gaudy stat line of 19 points, 22 rebounds and four blocks. He had 18 first-half rebounds to tie the NBA season high for a half.

Later, he put the Jazz up 90-71 after he blocked a shot, ran the floor and got a transition dunk off an assist from Elijah Millsap.

The only thing that slowed Gobert was a twisted ankle when he came down on a teammate. He finished the game, but was scheduled to see the doctors.

"He was really good tonight," Jazz coach Quin Snyder said. "I've been as hard on Rudy lately as anybody. He's great. He's tough-minded. He knows I want him to be better."

The Jazz continued to roll with their ninth win in the last 11 games. They have been winning with defence, which helped hold James Harden to just 15 points, but the 109 points were the most they scored since Jan. 30.

Hayward finished with 29 points, seven assists and four rebounds for Utah. Rookie Rodney Hood put up a career high for the second consecutive game with 20 points.

"(This) definitely carries a little more weight because they're right there in the running in the West," Hayward said. "It's a big game for us. We look at it with an MVP candidate. Guys that are proven. Guys that have won championships. People take that as a challenge."

The Jazz used their size to dominate the paint and Houston never put together a significant second-half run — and that's when Hayward and Hood got hot from the field.

Corey Brewer led the Rockets with 25 points, and James Harden was 3 for 13 from the floor.

"I am not worried about myself it is just the small things," Harden said. "I think most of these games we got out rebounded by a large margin. If we rebound the basketball my rhythm will come."

Rockets: Houston was outrebounded 34-22 in the first half to allow the Jazz to score 21 second-chance points. ... The Rockets never led.

Jazz: Trey Burke was 0 for 8 after going 1 for 11 on Tuesday night in a victory over New York. ... Hood made his sixth start of the season in place of Joe Ingles. ... Hayward returned to the starting lineup after being held out Tuesday with a lower back strain.

Snyder had a decision to make before the game — match up with the smaller Rockets are continue to play big with Gobert and Favours. He chose the latter, but spoke about the dilemma before the game.

"That's the question of all questions across the league, constantly," Snyder said. "We've traditionally stayed big and tried to make people guard us. But that's not something we're committed to over the course of the next year or two. I don't have a problem playing small. But when you're trying to build as much and do as much as we're trying to do, it's difficult to all of a sudden have another style of play.

"As good as (Gobert) is defensively or (Favours), there's times when, for matchup reasons, it makes sense to follow and go small. Oftentimes, it makes a lot more sense if you make them match up to you and you see two teams with different strengths."

Rockets: At the Los Angeles Clippers on Sunday.