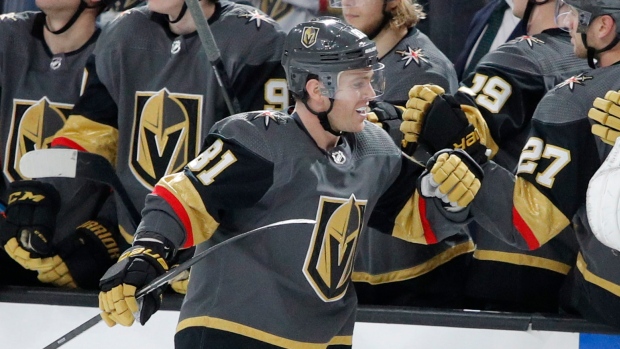 Vegas, of course, is trying to navigate a difficult salary cap situation. The team landed marquee free-agent defenceman Alex Pietrangelo in the off-season, fully anticipating a subsequent move would be necessary to become cap compliant. But that move hasn’t happened yet. A flat cap borne from the ongoing pandemic, plus the apparent lack of interest on the Marc-Andre Fleury trade front, has left Vegas in a tough position.

One problem for the Golden Knights: they aren’t uniquely challenged on the cap front. Sixteen teams have less than $2-million in space, and 10 of those 16 teams have zero space. But the need for productive wingers remains significant across the league.

This sort of difficult cap situation can be a boon for teams who have kept their powder dry on the salary front. Most of those teams are in rebuilding situations. Though they may not expect to compete for a playoff spot in the 2020-21 season, their longer-term outlook grows favourably as the talent pool on the NHL roster increases.

Perhaps the two most obvious examples of teams in this category are the Ottawa Senators and Detroit Red Wings.

A sniper like Pacioretty would improve any team, but he is more expensive than Marchessault and, more importantly, three years older. A player like Marchessault could easily be embedded onto these rebuilding rosters and immediately improve team talent levels without clogging up a roster spot long term.

Consider the current situation of the wing position, starting with Ottawa: 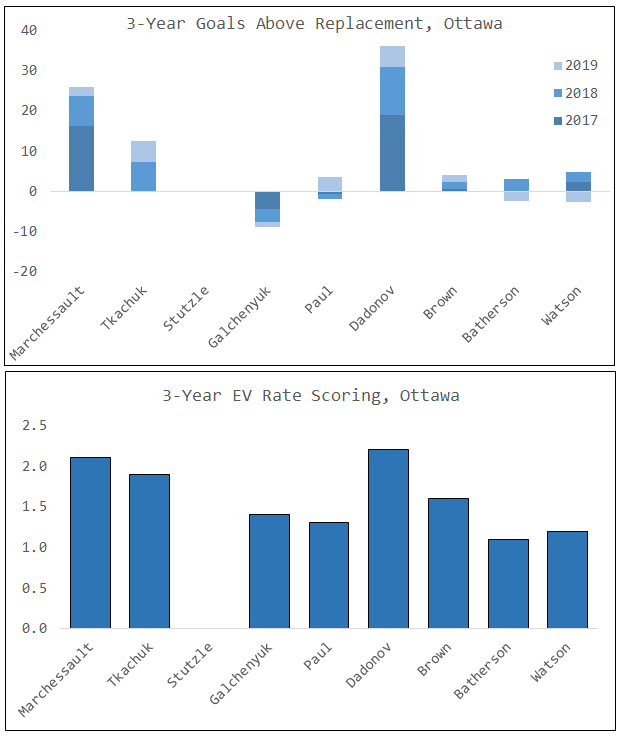 Whether you are using regression-based measures like goals above replacement to measure player contributions in all phases of the game, or more standard counting measures like rate scoring, it’s quite clear that Marchessault would immediately become one of Ottawa’s best wingers.

This team’s future will be dictated by the likes of Brady Tkachuk, but there is a reason the organization went out and signed Evgenii Dadonov. Despite one of the most impressive prospect pools in the National Hockey League, Ottawa’s talent at the wing position today is rather dire.

Productive wingers like Connor Brown and Nick Paul are going to be forced into bigger roles because there is no one to insulate them, which then forces players who may not be ready for NHL competition to slide into middle-six and depth roles. This isn’t just an even-strength problem – Ottawa’s power play was a disaster (14 per cent) last season, in large part because of how few credible scoring threats the team could ice. (Marchessault’s 12 power-play points would have led the Senators last season.)

Now let’s think about it from Detroit’s perspective: 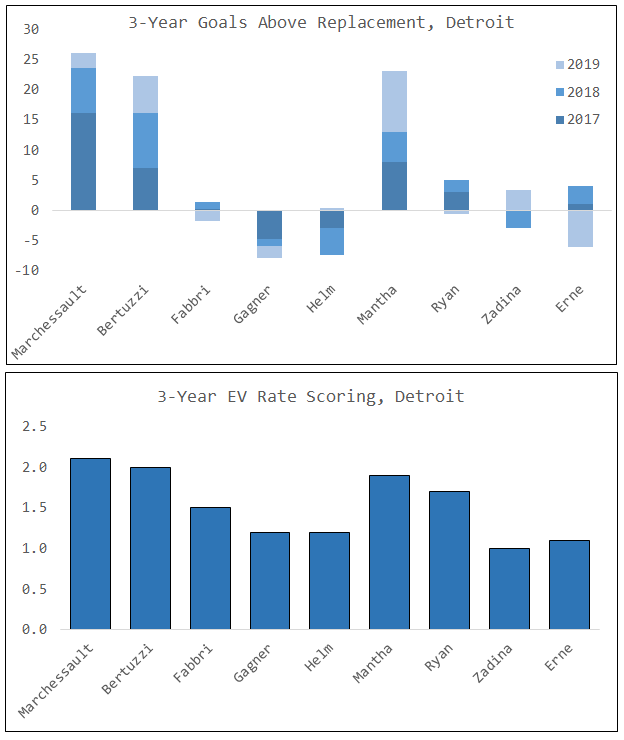 The Senators are a bit further along than the Red Wings in their rebuild. In one way, that might be reason for Ottawa to be opportunistic on the trade front and see if they can reach some semblance of competitiveness as early as next season.

On the other hand, a team like Detroit – probably in a hopeless position heading into next season – has a higher likelihood of needing the help long term. Tyler Bertuzzi and Anthony Mantha are already stars in this league, but the drop-off to the rest of the field so far has been significant. It should go without saying that trying to win with just two dangerous wingers on an NHL roster is not a viable strategy.

The Red Wings do have pieces in the development queue. Filip Zadina is still just 21, and two Swedes — Jonatan Berggren (Skelleftea AIK) and Lucas Raymond (Frolunda) — are promising players down the road. But like Pierre Dorion in Ottawa, Steve Yzerman has to constantly weigh the risk of banking on prospect hope. For every player with draft pedigree who successfully makes the jump to the NHL, another player ends up being a developmental bust who falls out of the system in short order.

A player like Marchessault would immediately move into the top six (and stay there for years) for both of these franchises, and, quite frankly, it’s not often a player of his calibre becomes available in this manner. This is where being opportunistic with cap space – and knowing how to mitigate the risks associated with putting all of your eggs in the prospect basket – can really put rebuilding organizations in a position of strength.

Because Vegas can’t take on salary and because they are still Stanley Cup contenders, the Golden Knights are going to be merely looking for a cheaper replacement option and futures. That sort of price is digestible for a 29-year-old signed through 2023-24 and on a back-diving, team-friendly contract.

Grabbing good players from the trade block doesn’t mean the rebuild is over. It means that you had the assets and flexibility to take advantage of another team’s situation. Do that frequently, and you’ll be back in playoff contention in no time.