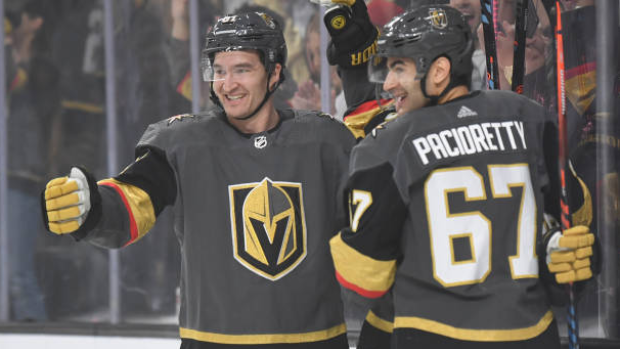 A week past the trade deadline, it is still hard to digest how Mark Stone landed with the Vegas Golden Knights. Star players just don’t get traded very often in the modern NHL, and to call Stone merely a star player could be an understatement. But the Senators are a unique franchise that offered an irresistible opportunity to a Vegas team serious about winning a Stanley Cup this year. I think general manager George McPhee summarized it best: “You don't get players like this very often. Players this good aren't available through trade very often.”

Vegas have been well-positioned for a playoff berth for some time now, but that’s largely because of (a) a mid-season surge that created significant separation; and (b) the inability of any Western Conference team to close the gap. That doesn’t mean they were playing Stanley Cup-calibre hockey, though. Part of what made the Stone trade so fascinating from a Vegas perspective was the fact the Golden Knights were in quite the rut as of late – the type of rut that might make teams a bit more bearish on a deal of significance at the trade deadline.

Looking at Vegas’ performance month-by-month, you can see just how rough it has been of late:

Vegas has dominated the play, territorially speaking, for two years now – you can see that the Knights are viciously outshooting and outchancing opponents in every month of this calendar season. But keep in mind that’s somewhat out of necessity – the Knights need to be elite at 5-on-5 because their power play (23rd in the NHL) has long been stuck in mud and their goaltending is once again around league average.

Their competitive advantage is blitzing teams shift after shift in the most important game state, and when they are clicking there, they are almost impossible to beat. (If you need any evidence, their three-month run starting in November was blistering.)

One way to reinforce that competitive advantage is to bring in one of the best drivers of play in the National Hockey League. Stone has built quite the reputation as an elite two-way forward, and it’s obvious in the numbers. Over the past three seasons, the list of forwards who have had a larger positive impact on teammate performance is impossible to find. No player – not Connor McDavid, not Sidney Crosby – has boosted his teammates’ goal differentials more than Stone.

If you adjust for goaltending performance and use expected goal differentials as opposed to actual goal differentials, you get the same conclusion. If you ignore goals and just focus on shot differentials, you reach the same conclusion. Stone is number one in all three categories! (This is certainly why Vegas’ analytics team loves Stone, as I suspect is true for every other team in the league.) The below bubble graph captures this well. Pay specific attention to the type of players clustered around Stone here: 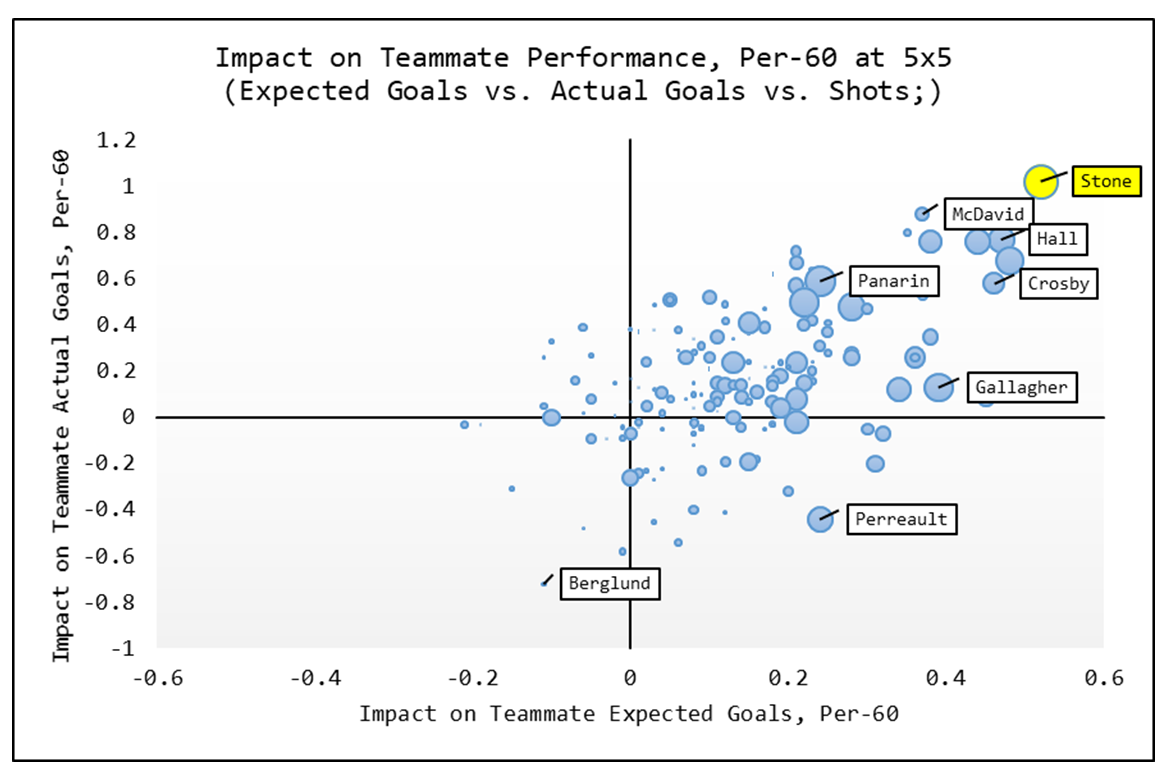 Any time you’re sitting next to the likes of the aforementioned Crosby/McDavid and New Jersey’s Taylor Hall, you are probably doing something right. For every 60 minutes of play, Stone adds the following to his team’s performance: +0.5 in expected goals (blind to goaltender performance), +1.0 in actual goals, and +10.6 in shots. Regardless of your preferred measure for understanding how an individual drives performance and impacts the play of his teammates, Stone is the clubhouse leader.

That is the perfect segue to what has happened in Vegas since the trade. Head coach Gerard Gallant bucked early prevailing thought and preserved the Jonathan Marchessault, Reilly Smith, and William Karlsson line. Instead, he opted to play Stone on what’s effectively their ‘1B’ line with Paul Stastny and Max Pacioretty. Gallant’s high-level review of that line’s performance to date: Excellent forecheck, tons of scoring chances for and very few scoring chances against.

That’s borne out in the numbers that are publicly available. The Golden Knights have been rolling since adding Stone, and it’s not just because Stone’s line is driving fantastic performance. The creation of that line has opened up the floodgates for the rest of Vegas’ attacking group against weaker competition and their numbers are surging as a result: 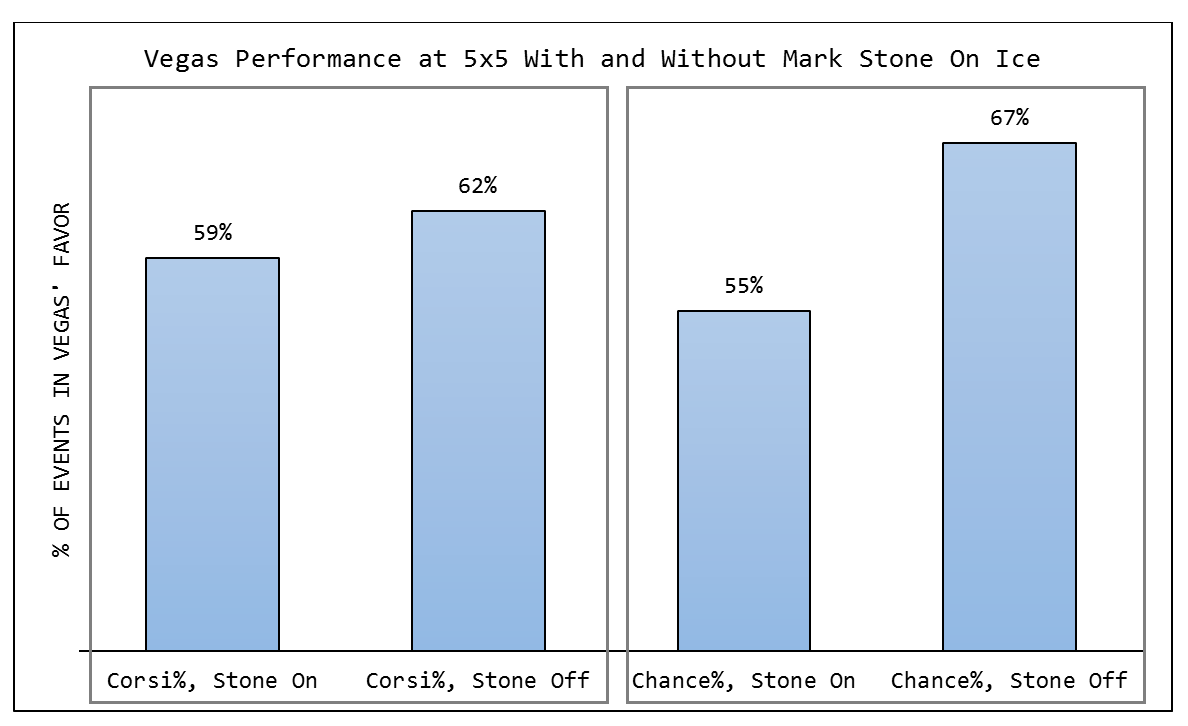 Yet Vegas are better with that line off the ice! I mentioned earlier that I believe the Stone line has drawn increased attention from opponents, which has freed up other lines. Consider Vegas’ ‘other’ top line of Marchessault, Karlsson, and Smith. When they have been on the ice over these four games, they’ve had 64 per cent of the shots and scoring chances. That line was at 50 and 43 per cent respectively in the prior four games without Stone.

It will be interesting to see if the Golden Knights will continue to drive play this aggressively, especially when the competition stiffens this week – they’ll play division rival Calgary twice in five days, with games against Winnipeg and San Jose right around the corner.

If this play does sustain, Vegas will move quickly towards the top of the Western Conference pecking order.