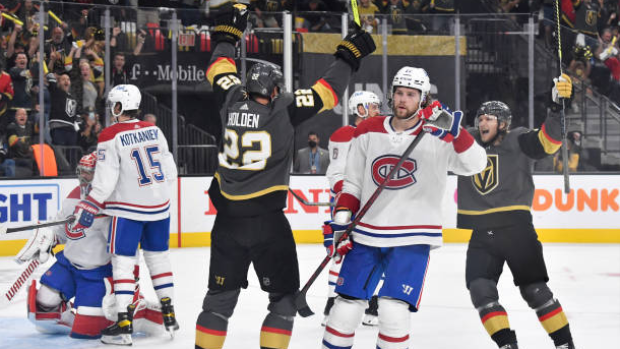 The Montreal Canadiens saw their seven-game playoff winning streak come to an end in Monday's 4-1 loss to the Vegas Golden Knights in Game 1 of their third-round series.

Shea Theodore scored the first goal of the game for Vegas, which head coach Peter DeBoer stated postgame was a clear objective for his team.

"We talked in our pre-scout meetings that they would be uncomfortable in their structure playing from behind," DeBoer said. "No one made them play from behind for a while.

"The goal was huge and at the right time with how we were playing."

Theodore's goal, a point shot that beat Carey Price, marked the first time the Canadiens have trailed since losing Game 4 of their first-round series against the Toronto Maple Leafs on May 25. Montreal's streak of 447:08 without trailing ended as the second-longest in NHL postseason history.

After Alec Martinez scored for Vegas early in the second period, Canadiens rookie Cole Caufield cut the deficit back to one with his first goal of the postseason, but Mattias Janmark restored a two-goal lead just 53 seconds later.

"I think we had our chances to get back in the game," Caufield said. "It was tight there for a while. We got it back to 2-1 and just some bad bounces. There are things we can get better at and work on. We'll be ready for Wednesday."

The Canadiens, who lost their opening game of the series for the first time this postseason, outshot the Golden Knights 12-8 in the first period.

"We'll adjust like we know we can do. We know how to do it. That impacts a lot on the pace of our game."

The Canadiens will look to even the series on Wednesday before returning to Montreal for Game 3 on Friday.