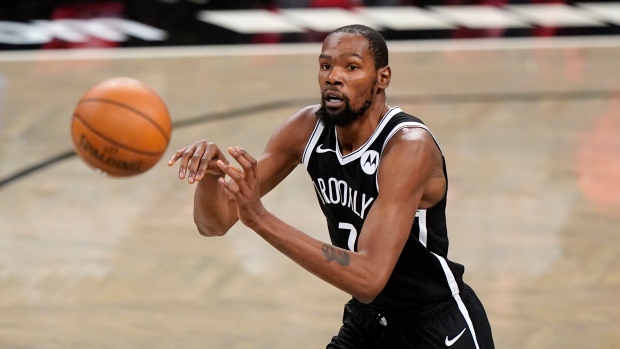 Just two months removed from LeBron James and the Los Angeles Lakers capturing basketball’s highest honour, the NBA has returned and, in the process, will set a new record among the North American Big Four sports leagues for having the shortest off-season ever.

The ongoing global COVID-19 pandemic was to blame for the 2019-20 NBA season being extended, and it is also the cause of this season’s quick turnaround and slightly reduced 72-game team schedules. Nevertheless, the 2020-21 season looks like it could be one of the most competitive campaigns in the last few years.

The balance of power across the league started to shift ahead of last season, and it definitely has once again with Kevin Durant—one of the greatest players in the history of the NBA— set to make his debut for the Brooklyn Nets tonight on TSN, against his former teammate, two-time league MVP, Stephen Curry, and Durant’s former team, whom he won two NBA titles with, the Golden State Warriors.

Here are some story lines to keep an eye on while watching tonight’s matchup between the Nets and Warriors, which will be the first game of the new NBA season.

Though he is officially entering his second season with the Nets, this season will mark Durant’s first actually playing games with the club after he sat out all of last season after tearing his right Achilles tendon in Game 5 of the 2019 Finals while with the Warriors.

Fresh off a couple of recent pre-season games with the Nets, where he averaged 20 points, 4.5 rebounds and 2.5 assists, Durant looks like he’s ready to return to his dominant form. But now it begs the question: After watching his impressive pre-season play, will it continue or will the former league MVP need a bit of time to actually return to form?

Can Irving dominate alongside Durant?

There’s no question that Kevin Durant is one of the NBA’s elite players when healthy, and his teammate Kyrie Irving is a star as well, but it remains to be seen whether the two can dominate opponents while playing alongside one another.

Irving, who started out healthy last season with the Nets and played well early in the season, ultimately had a disappointing campaign overall as he was only able to play 20 games because of an injury to his right shoulder.

Some NBA fans have shown animosity towards Irving lately because of his disappointing season with the Nets, which came on the heels of an odd one-year injury-plagued season with the Boston Celtics, whom Irving played for before jumping over to the Nets. He also hasn’t done much to help his image lately with his behaviour towards the media.

Is Nash ready to lead the Nets?

Steve Nash is a Hall of Famer and was one of the best passers the NBA has ever seen, but his skills as an NBA coach are unknown. Nash, who was hired in the off-season to lead the Nets, is a rookie head coach in every sense.

The Canadian product has no prior experience as a coach or an assistant on any level. He has only served as a player development consultant for the Golden State Warriors, and was also previously the general manager of the Canadian men’s national basketball team.

Nash successfully led on the court during his playing days, but it remains to be seen how effective he’ll be leading a team from the bench with Durant and Irving on it.

Besides Nash, the Nets will also have Amar'e Stoudemire and Mike D'Antoni as assistant coaches, which reunites a trio that electrified the NBA during the mid-2000s.

Can Curry carry Warriors without Thompson?

Stephen Curry has been credited by some as having changed the NBA with his ability to shoot from practically anywhere on the court. The two-time league MVP and three-time champion has had a stellar run with the Warriors, but for most of his tenure he’s played alongside his sharp-shooting teammate, Klay Thompson, who once again will be out this season after tearing his right Achilles tendon.

The Warriors were without Thompson for all of last season as well after he tore his left ACL, and the team struggled. Curry also played in just 20 games last season because of a left-hand injury.

While the Warriors have other players that are certainly able to contribute, Curry is the only bona fide star on the team this season in a league where it now seems that most of the contending teams have at least two stars on their rosters.

Will Wiggins help carry the load?

While the Warriors may not have Thompson this season, they do have former No. 1 overall pick, Andrew Wiggins. The Canadian, for the most part, who joined the Warriors via trade last February, put up some nice numbers in his short time with the team but he’ll be expected to step up more with Thompson out again.

Despite the obvious talent he possesses, Wiggins has long had his share of doubters because of the inconsistency in his play that he’s shown throughout his previous seven seasons in the NBA.

With Thompson sidelined all of last season and Curry missing most of the campaign, the Warriors did something they hadn’t done in quite some time: lose a lot of games. In fact, the Warriors won just 15 games during last season’s COVID-shortened campaign, which helped them secure the No. 2 overall pick in the 2020 draft, which they used to select University of Memphis big man James Wiseman.

During their impressive run—which included three championships in five appearances from 2015-2019 — the Warriors haven’t had a true star big man. Wiseman, who starred at the collegiate level despite playing in just three games for Memphis, can perhaps fit that role.

With Thompson out of the mix, there will certainly be more opportunities for Wiseman to make his mark on the team.