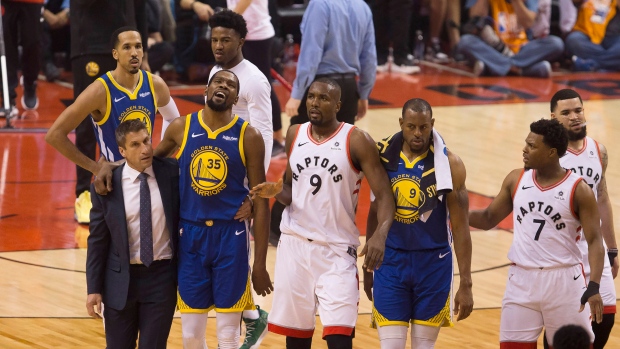 TORONTO — On the night of his return, Golden State Warriors star Kevin Durant exited Game 5 of the NBA Finals against the Toronto Raptors with an Achilles injury.

Durant grabbed his right leg after planting and turning the ball over early in the second quarter on Monday.

Durant was ruled out for the game early in the third quarter and is scheduled for an MRI on Tuesday. He was seen leaving Scotiabank Arena on crutches and with a walking boot.

Durant, who was playing for the first time since suffering a calf injury on May 8, was helped off the court by teammates and trainers.

According to ESPN's Ramona Shelburne and Adrian Wojnarowski, the Warriors believe Durant's MRI will confirm a torn Achilles.

Durant was dribbling on the right wing and came up lame, falling to the floor and needing help to get back to the Warriors' bench area.

He didn't stop there, and limped to the Warriors' locker room — yelling an expletive before leaving, in obvious frustration.

The Toronto crowd cheered immediately after noticing the injury, but Raptors' Kyle Lowry, Serge Ibaka and Danny Green waved their hands to try to get the fans to stop.

The fans then responded by chanting "K-D."

"Nah you don't cheer for a player that gets injured come on now," Nurse tweeted.

Philadelphia 76ers star Joel Embiid had a similar reaction, tweeting "Why are they cheering for his injury? Come on man #Disgusting"

Durant had scored 11 points on 3-of-5 shooting before the injury.

Warriors coach Steve Kerr said in a pre-game press conference that Durant had been cleared and would be in the starting lineup.

The two-time NBA Finals MVP sustained the injury during Game 5 of the Western Conference semifinal against the Houston Rockets.

"Even without having played, he's still a huge threat. Just his mere presence makes a huge difference for us," said Kerr. "We'll start him and play him in short bursts and see how he responds physically, see if his wind is OK, and as the game goes, we'll try to figure it out from there."

Raptors coach Nick Nurse said his team's been readying itself for Durant's return for most of the Finals.

"The reports have been coming out since Game 1, I think, that he was going to play by Game 3. So we prepared each game, 3, 4 and now 5," Nurse said. "So it wasn't like it was a total departure from everything we have been doing.

"But yeah, we put in some clips of him today and walked through some stuff."

Durant, the 2017 and 2018 NBA Finals MVP, had a 51-point game in Toronto against the Raptors in a regular-season game in November. The Raptors won that game 131-128 in overtime.

"He brings everything, right?" Nurse said of Durant's impact. "He first of all, brings an explosive transition game. He'll race up the floor and pull up from across half court, like a couple of their other guys do. So it's another threat in transition you got to get ready for."

Nurse said there are no injury limitations on any of his players for Game 5.

OG Anunoby, who had an emergency appendectomy in April and has yet to play this post-season, has been cleared for days.

"I don't know about that, but he is ready to go," Nurse said. "He's been cleared health-wise for the last couple games, but again it just depends. It's situational. We're pretty happy with our rotations here for the last 8, 10, 12 games. But he's ready and he may get out there."