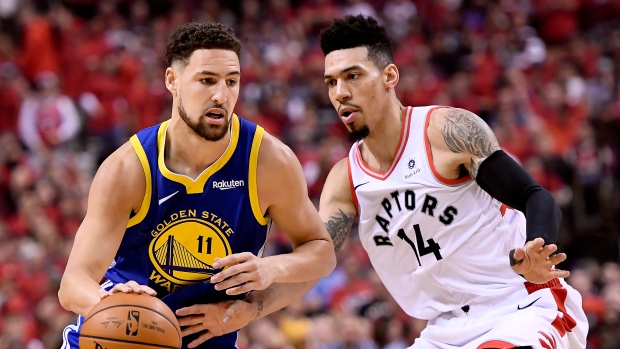 TORONTO — The Toronto Raptors unravelled in the time it took plenty of stunned fans to file back into their seats with their halftime beers.

Eight straight missed shots and five turnovers. And just six minutes into the third quarter, the Raptors' double-digit deal had morphed into a 13-point hole too deep to dig out of.

Klay Thompson had 25 points, while Stephen Curry had 23 and the visiting Golden State Warriors beat Toronto 109-104 with a superb third quarter on Sunday, sending the best-of-seven NBA Finals to Oakland, Calif., tied up at 1-1.

"I feel like our pace was good early, it was just that third quarter, I feel like it just really killed us — 18-0 run, if we can't score no baskets, you're not going to win no game," Raptors star Kawhi Leonard said.

Raptors coach Nick Nurse also lamented the lack of the offence during the ugly game-turning stretch.

"I'm going to have to rewatch that," he said. "I'm probably not going to enjoy it very much."

Leonard had 34 points, shooting an NBA Finals record 17-for-17 from the free-throw line, and hauled down 14 rebounds to lead the Raptors. It was his 12th 30-point game of these playoffs. Fred VanVleet had 17 points, while Kyle Lowry had 13 points before picking up his sixth foul and leaving the game with 3:52 to play.

Nurse had addressed the proliferation of post-season fouls in his pre-game press conference, saying "it's strange because it doesn't seem like you're ever in foul trouble in the regular season."

The referees were an unfortunate storyline of Game 2 as Lowry found himself in foul trouble early and played just 27 minutes. The quick whistles outraged Raptors fans. Referee Tony Brothers was trending on Twitter.

"Some of the things I don't necessarily agree with, but they're called," Lowry said.

Pascal Siakam chipped in with 12 points as Toronto continued its first NBA Finals appearance in its 24-year history.

The Raptors led by as many as 12 points in the first half, but the Warriors are known for their superb third quarters. VanVleet finally ended Golden State's huge run — it was 20-0 going back to the second quarter — with a three-pointer with 6:20 remaining in the third.

"Missing every shot doesn't help, 10 possessions in a row we didn't score, I'm not even sure," VanVleet said.

The Warriors led 88-80 with one quarter to play. Danny Green's three-pointer cut Golden State's lead to just four points with nine minutes to play, but the Warriors' offence, which had 34 assists on 38 made baskets on the night, was sizzling. Their defence was locked in. And almost nothing was falling for Toronto.

"We started to look like ourselves, and so at that point it just felt better . . . we ended up with 34 assists which is more like our team," Warriors coach Steve Kerr said. "It was a great win, we get to go home and protect our home floor."

An Andrew Bogut basket had Golden State up by 12 with 5:40 to play. The Raptors then chipped away and three free throws from Leonard, one of them for a technical called on Curry for tossing the ball up in the air in anger, pulled Toronto to within five points with 1:08 to play.

Green drilled a three with 26 seconds to play, making it a two-point game and prompting a roar from the Scotiabank Arena crowd. But a wide-open Andre Iguodala replied with a three with 5.9 seconds left to put the Warriors back up by two possessions.

Asked whether the Raptors wanted the ball in Iguodala's hands versus Curry on that basket, he replied: "No. We wanted to see it in our hands. We wanted to get a steal."

Nurse said the Raptors should have fouled before Iguodala's shot.

"(Iguodala) has hit a lot of big shots in the Finals before, so he was unfazed," Kerr said.

Green's three at the buzzer bounced off the rim, ending the game.

Baskets were at a premium in the game's early minutes, the two teams shooting a combined 5-for-19 before the first timeout. The Raptors took a six-point lead on an alley-oop dunk from VanVleet to Siakam, but the Warriors promptly went on a 10-0 run to go up by four. Toronto led 27-26 to start the second.

Leonard converted a three-point play to stretch the Raptors' lead to 12 points with just over five minutes to play in the first half. A couple of Curry free throws with four seconds left sliced the Raptors' advantage to 59-54 at halftime.

"We cut the lead to five and could kind of breathe at halftime," Kerr said. "I think our guys felt renewed life at that point."

The Raptors won Thursday's series opener 118-109, riding the momentum of four straight victories over Milwaukee in the Eastern Conference final.

Games 3 and 4 are Wednesday and Friday in Oakland. Game 5 is Monday, June 10 in Toronto.

"We're in the same boat they were in coming here, we gotta go out there and get one," Nurse said. "That's all we gotta do — get one. We can do that."

The Raptors hope to have OG Anunoby back on the floor soon. The athletic forward, who had an emergency appendectomy the night before the post-season tipped off, was finally activated on Sunday, but Nurse said he had lost a significant amount of weight, and probably wouldn't play until later in the Finals.

The Warriors had their own health woes Sunday. Curry appeared ill in the first half and briefly left the bench with the Warriors' medical staff, while Iguodala was shaken up late in the first half after backing into Gasol on a hard screen, and Kevon Looney left the game with a left chest contusion. Thompson also left in the fourth after appearing to injure his leg.

Sunday's star-studded crowd featured former U.S. president Barack Obama — who sat in the middle of the lower bowl alongside NBA commissioner Adam Silver, and received a standing ovation plus chants of "M-V-P!" when he was introduced — plus former Toronto Blue Jays star Roberto Alomar, golfers Rory McIlroy and Sergio Garcia, and numerous recording artists including J. Cole, The Weeknd, Shawn Mendes, and, of course, Drake.

Kerr, who's never been shy with political statements, wore a T-shirt that said "Vote For Our Lives" to the pre-game press availability, in response to the recent mass shooting in Virginia Beach.