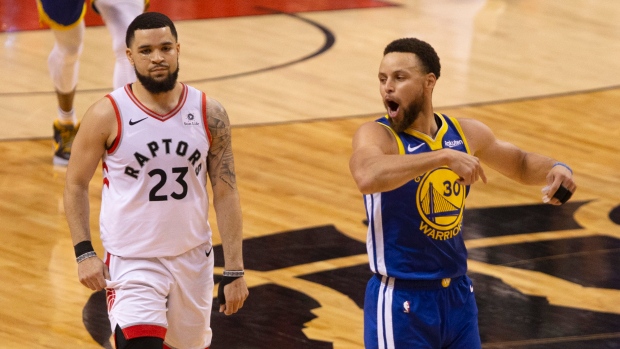 TORONTO — The Toronto Raptors nearly pulled off a comeback to win their first NBA title in franchise history on Monday night. But the Golden State Warriors nailed a trio of late three-pointers to make sure that didn't happen.

The shots were falling for the two-time defending champions. Not so much for the challengers.

"They hit a couple tough (three-point shots) but most of those were wide open ones," said Raptors point guard Fred VanVleet, who finished with 11 points and hit 3-of-6 three pointers.

"Breakdowns and offensive rebounds and blown switches and stuff like that, so we gotta be better."

Golden State, known for its deadly accuracy from three-point range, hit 47.6 per cent, connecting on 20-of-42 attempts — the second-highest total in an NBA Finals game and the most Toronto has ever allowed in a single game, playoff or regular season. The previous opponent high for Toronto was 18, set by Cleveland in the 2017 playoffs.

The Warriors hit seven threes in the first quarter and a whopping 11 in the third. This after Toronto had held Golden State to eight three-pointers (on a 29.6 per-cent clip) in all of Game 4 on Friday night in Oakland.

The Raptors, meanwhile, were 8-for-32 from three on Monday. Their shooting from deep has been inconsistent for much of the playoffs — they were 2-of-17 from three-point range in the first half of Game 4.

"They made a lot of shots," said Toronto centre Marc Gasol.

Klay Thompson led the barrage, shooting 7-of-13 while fellow "Splash Brother" Stephen Curry was 5-for-14. Even Kevin Durant, who logged just 12 minutes before leaving the game with an Achilles injury early in the second quarter, sank three three-pointers (on three attempts).

With Toronto up 103-97 late in the game, Thompson and Curry responded with three straight daggers. Thompson sank a three with 2:32 to go, Curry hit one a minute later to tie it, and Thompson put Golden State up 106-103 with 57 seconds left. Toronto couldn't recover.

"We stayed in the moment, they came back and made three straight threes," said Kyle Lowry, who had a chance at a game-winning three with the shot clock winding down, but missed.

"(We) played some good defence down the stretch. We just missed some shots and they did what they were supposed to do."

Thompson wasn't surprised by his team's ability to bounce back late in the game. He's used to hitting big shots when it matters.

"We have been down big before, we have been down fourth quarters, late in games," he said. "Coach (Steve) Kerr drew up a couple great sets and me and Steph just got clean looks and you don't want to give us too many of those because they will go in most of the time."

The Raptors hit 17 three-pointers in Game 3 in Oakland, tying a record for a road team in the NBA Finals.

The Finals record is 24 three-pointers by the Cleveland Cavaliers against the Warriors on June 9, 2017.