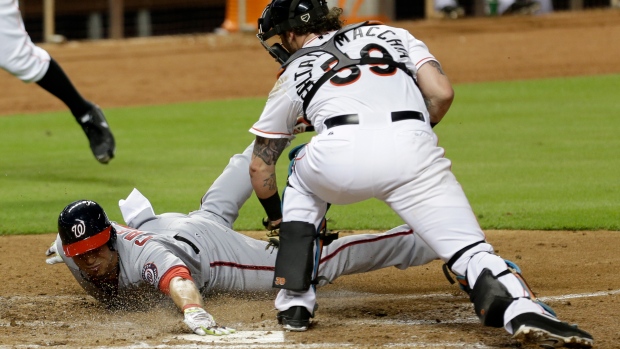 MIAMI - Gio Gonzalez allowed two runs in seven innings, Bryce Harper had three hits, and the Washington Nationals kept up their push for home-field advantage in the NL playoffs by beating the Miami Marlins 6-2 on Thursday night.

Kevin Frandsen and Anthony Rendon each had two hits for Washington (88-64), which opened the night 1-1/2 games ahead of the Los Angeles Dodgers in the race for the NL's best record.

A Miami native, Gonzalez (9-10) allowed six hits, striking out five and walking none.

Jeff Baker drove in one run and scored another for the Marlins (74-78), who opened their final homestand of the season. Miami needs seven wins in its last 10 games to finish with a non-losing record for the first time since 2009.

Washington's streak of 22 road games with a home run was snapped. It was the second-longest streak in the majors since 1900; only the Baltimore Orioles in 1996 had a longer run, hitting at least one in 24 consecutive road games.

The Nationals hit 41 homers in their streak.

They didn't need one Thursday, taking control with a five-run fourth — doing all that scoring with two outs.

Wilson Ramos' double started the flurry by driving home Anthony Rendon to tie the game, and the Nationals were on their way. Frandsen had Washington's sixth and final hit of the inning, with Harper scoring on the play and Cabrera also crossing the plate after Reed Johnson's throwing error.

Johnson had an RBI double in the second for Miami, snapping a season-high streak of 26 2-3 scoreless innings by Washington starting pitchers.

Nationals: 3B Ryan Zimmerman went 1 for 7 as the DH in a simulated game at the Nationals' training facility in Viera, Florida. Zimmerman has played in only 53 games with Washington this season, first because of a broken right thumb and most recently because of right hamstring trouble.

Marlins: RHP Jose Fernandez, out for the season because of elbow reconstruction surgery, might begin a light throwing regimen on Oct. 1. The Marlins are hoping to have their ace back by the All-Star break next season. Also, RF Giancarlo Stanton, out for the season because of injuries sustained last week when he was hit in the face by a pitch, rejoined his teammates and said his recovery is going well.

Nationals: RHP Doug Fister (14-6, 2.55) gets the ball Friday night in Miami, looking to set a career-best for victories in a season.