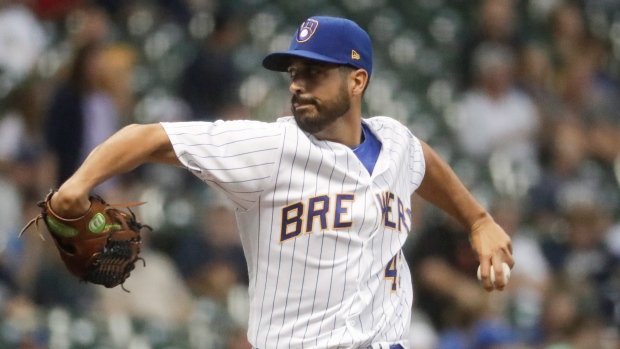 KISSIMMEE, Fla. — The New York Yankees reached into the remainder of the free-agent market to bolster their ailing rotation, agreeing Monday to a minor league contract with Gio Gonzalez.

If added to the 40-man roster, the 33-year-old left-hander would get a $3 million salary while in the major leagues and the chance to earn performance bonuses. He was a far cheaper alternative to higher-priced options such as Dallas Keuchel.

"Being a couple guys down, to have a guy like him still available, a luxury to be able to add him just for some depth," Yankees manager Aaron Boone said. "He's certainly good enough to be very much in the mix of things. But we'll see how far along he is and if we're at a point where he's in play actually for the next couple, few weeks."

New York ace Luis Severino is sidelined by right shoulder inflammation and will not be available until May at the earliest. In addition, CC Sabathia is likely to miss the first week or two as he recovers from an off-season that included knee surgery and the insertion of a stent after a blockage was found in an artery from his heart. Sabathia also must serve a five-game suspension for hitting Tampa Bay's Jesus Sucre with a pitch in his last regular-season start of 2018.

Gonzalez is a two-time All-Star and was 21-12 in 2012, his first season with the Nationals. He is 127-97 with a 3.69 ERA in 11 major league seasons and just finished the second option season of a contract that wound up being worth $65.5 million over seven years.

Yankees general manager Brian Cashman said Gonzalez can opt out of his deal if he's not added to the major league roster by April 20.

"It's him compared to anybody else we currently have at Triple-A through April 20, and the guy he has always been is lot better than those guys," Cashman said.

Gonzalez was 10-11 with a 4.21 ERA last season for Washington and Milwaukee, which acquired him on Aug. 31. He was 3-0 in five starts for the Brewers down the stretch, then started Games 1 and 4 of the NL Championship Series against the Los Angeles Dodgers. He was pulled after two innings of the opener and one inning of his second appearance, allowing one run in each.

Aaron Boone's father, former big league catcher Bob Boone, has seen Gonzalez in his role as Washington's vice-president and senior adviser to the general manager. Aaron Boone plans to have dinner with his dad when the Yankees travel across Florida to the east coast later this week.

"I'm sure I'll dive in on him a little bit," Aaron Boone said.

Cashman said the deal came together during Monday night's 7-4 exhibition win over Atlanta. Luke Voit, trying to beat out Greg Bird for the first base job, hit his fourth homer. Aaron Judge hit a two-run triple. Judge has four doubles, a triple, six homers and 14 RBIs this spring.

In his next-to-last tuneup for opening day, Tanaka allowed one run and two hits in five innings, giving up a homer to Nick Markakis.

"The movement of the off-speed pitches was good," Tanaka said through a translator. "Didn't have much energy on the fastball early, the first two innings or so, but I think velocity kind of came together towards the end."