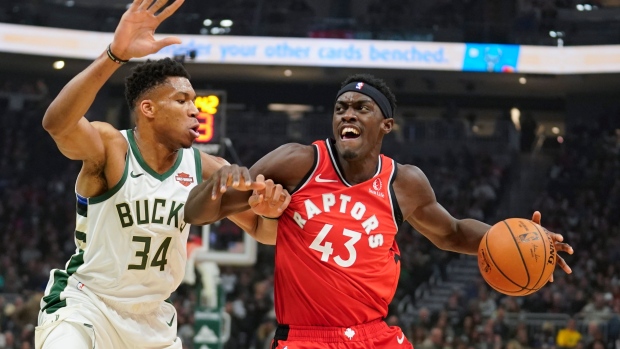 They’re not just winning games, they’re steamrolling the competition. Their league-leading point differential of plus-12.4 per contest is 5.0 points better than any other team. They’ve been a regular season juggernaut, an unstoppable force in the Eastern Conference and at the very top of the NBA.

“I watch them play and they win every game by 20 points and I don’t know what to make of it other than nobody can even come close to them,” Raptors head coach Nick Nurse said. “When I do watch them it’s boring. They’re really, really good and the game’s are over by halftime most of the time.”

You watch the Bucks, as Nurse does, and you see them embarrassing some of the top teams in basketball. You see the way they share the ball and shoot the three. You see their league-best defence and marvel at their reigning MVP Giannis Antetokounmpo.

They haven’t lost consecutive games since the Raptors overcame a 2-0 series deficit to beat them four times in a row and knock them out of the playoffs last May. The more you see of these Bucks the more impressive it is that Toronto, or anybody, was able to take four straight games off them. Although, that’s not the way the Raptors see it.

“I mean, we won the championship,” Pascal Siakam reminded a few reporters, with a laugh, on Sunday night. “I think we’re pretty OK [too].”

There’s a mutual respect between these old rivals, but if you think the Raptors are intimidated by the Bucks and their regular-season success, you’re not giving this Toronto team enough credit.

The Raptors will host the Bucks in a highly anticipated showdown of the NBA’s two hottest teams on Tuesday. It’s their first meeting since Nov. 2 and Milwaukee’s first trip north of the border since Toronto’s series-clinching win in Game 6 of the Conference Finals last spring.

The defending champions come in having won 17 of their last 18 games. Their most recent, a wire-to-wire 127-81 drubbing of the Indiana Pacers on Sunday, was the largest margin of victory in the franchise’s 25-year history.

Most importantly, though, the Raptors have been where the Bucks are trying to go, and they know how to get there. They’ve reached the mountaintop. They’ve also been responsible for ending Milwaukee’s season in two of the past three years. If that’s on anybody’s mind, if that’s in anybody’s head, it’s probably not the reigning champs.

“I don’t look back at it,” Siakam said. “That was last year. I don’t care [about it]. We have a new team and we focus on this year. Last year is over. They have the same team but we have a whole different team and we have different roles. I don’t look at that, to be honest.”

Both teams entered the campaign motivated by what they had lost. The Bucks hoped to prove they were still on rise, despite another post-season collapse and losing glue-guy Malcolm Brogdon over the summer. The Raptors felt slighted by the pundits that predicted imminent doom in the aftermath of Leonard and Danny Green leaving in free agency.

They’ve both proven all they need to prove, and all they can prove, at least for the time being. It’s hard to imagine either team putting much stock into a game, any game, in late February, knowing what they know.

Regardless of what happens on Tuesday, the Bucks know they’ll be typecast as a regular season team until they finally get over the hump in May. The Raptors know they’ll continue to be overlooked unless their balanced offensive attack and crafty, versatile defence translates on the big stage.

The game means very little in the grand scheme of things. The Bucks have already clinched a playoff spot and sit 6.5 games ahead of Toronto for first place. The Raptors still hope to catch them but that would likely require them to take all three head-to-head meetings, and they would still need Milwaukee to stumble down the stretch.

Meanwhile, they’re playing it safe with the health of Marc Gasol and Norman Powell, who remain out indefinitely, and intend on continuing to experiment with lineups, coverages and Siakam’s usage over the coming weeks. If Nurse’s team didn’t understand the marathon that is an NBA season a year ago, they certainly do now.

That doesn’t mean Tuesday night – and the home-and-home between these two teams in early April – won’t be fun, though.

While the Raptors have won 17 of 18 games, 12 of those wins have come against teams with losing records and three of the other five came against the Pacers. It’s an impressive run, to be sure, but Toronto hasn’t been challenged like this in a while. Neither have the Bucks, who will be in the second night of a back-to-back after flying into Toronto from Washington, where they play on Monday.

It’s a rare opportunity for both of these teams to measure themselves against one of the few teams in, or close to, their weight class. It could also be a bit of a chess match between two great tacticians – Mike Budenholzer, last season’s Coach of the Year, and Nurse, a frontrunner to win this season’s award. Could they hold things back, just in case they see each other in three months from now? Absolutely. But, even without much at stake, you can bet both teams want to one-up the other.

“It’s going to be a good game,” Siakam said. “I know we haven’t played them [in a while]. So I’m excited. They’re the top team, so everybody wants to beat them.”