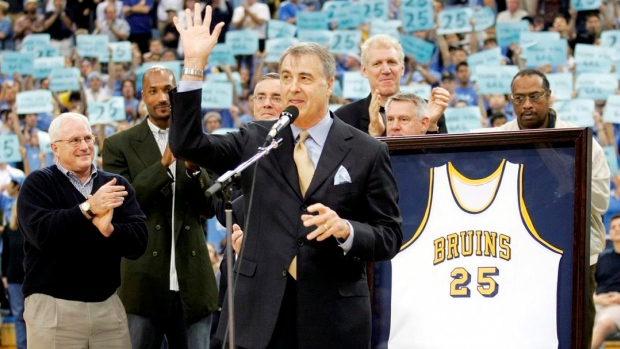 CHICAGO — More than three decades later, some details of the classic slam dunk contest showdown between Michael Jordan and Dominique Wilkins are a bit fuzzy to Hall of Famer Gail Goodrich.

One of five judges for the competition, the former Los Angeles Lakers' great is, however, certain of a few things:

His Airness soared to a slightly higher level than the Human Highlight Reel, there was no pressure to crown Jordan the slam dunk king on his home court and the judges were not in cahoots.

“It was very, very close,” Goodrich said of the competition. “They both performed with excellence. I thought that Michael performed just a little bit ahead of Dominique. I cast my vote for Michael.”

The return of the All-Star festivities to the Windy City for the first time since 1988 is stirring all sorts of memories of Jordan's dazzling performances at the old Chicago Stadium.

Not only did he score 40 points to lead the East over the West in the game, he took home the top prize in a slam dunk showdown that arguably remains the standard, edging Wilkins in the competition. Whether he deserved the crown is another issue.

TBS broadcasters Bob Neal, Rick Barry and Steve Jones questioned the judging at the end, with a laughing Jones even half-joking: “Note was passed on to the judges.”

Goodrich, however, insisted there was no thumb on the scale favouring Jordan, no pressure from the league.

“No, absolutely none,” he said. “Nor did, as judges, we confer with one-another. Not at all.”

The 76-year-old Hall of Famer also insisted the Chicago crowd played no role in the judges' thinking.

“Michael, I'm sure was a favourite,” he said. “But there was no pressure.”

There were seven contestants in the league's fifth slam dunk competition, with Jordan looking to repeat and Wilkins and the 5-foot-7 Spudd Webb also trying to become the first two-time champions. The field included high-flying Hall of Famer Clyde Drexler. And the display that unfolded was simply spectacular.

There was a collage of windmills and reverses and 360s. And there were three successful foul line dunks — one by Drexler and two by Jordan, including the winner right after he missed one.

It came down to Jordan and Wilkins in the third and final round.

Jordan won the coin toss and opted to defer, letting his opponent go first, and they matched perfect scores of 50 with their first attempts.

Wilkins — the winner in 1985 — followed that with another 50 by throwing down an explosive right-handed windmill along the baseline with his legs flailing. That's when the scoring appeared to go off kilter.

A two-handed double-clutch by Jordan drew a 47 that left the crowd irate at the judges, who then seemed to return the favour on Wilkins' next attempt. Needing a 48 to win, he came in from the left side and brought both hands down and around for an emphatic windmill. That drew a 45 and left the door ajar for Jordan.

He took off from the free throw line needing a 48 to tie ... and missed. Contestants were allowed one miss, so he got another try and made the most of it. This time, his left heal hit the foul line as he went airborne and soared, his left arm dangling by his side as he dunked with his right. The result was another 50 that made him the first two-time winner.

Goodrich couldn't recall the thinking behind how individual dunks were scored or how he got picked to judge. He was part of a panel with former NBA players Randy Smith, “Jumpin'” Johnny Green and Tommy Hawkins as well as Chicago Bears Hall of Fame running back Gale Sayers.

He had no ties to the city, unlike Green, Hawkins and Sayers. But he remembers being “honoured” to be selected.

He remains a big fan of the dunk contest, though not so much the All-Star game. And he plans to watch Saturday from Sun Valley, Idaho, where he lives.

“I mean, it was an exceptional, close competition," Goodrich said. "I do remember that. And I'm sure there are some people that thought that maybe Dominique could have easily won that. It was very, very close. I do admit that.”