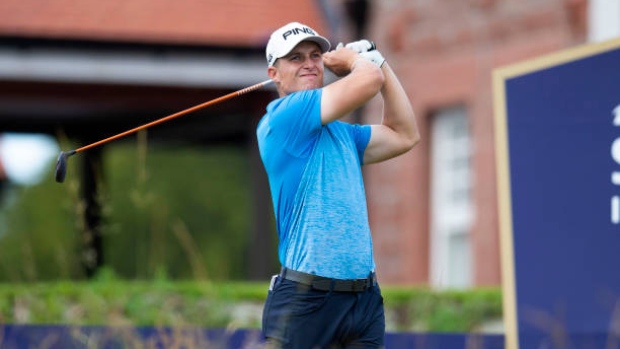 ST ANDREWS, Scotland (AP) — Grant Forrest produced a brilliant 10-under-par 62 to take a share of the third-round lead with fellow Scot Calum Hill at the Hero Open on Saturday.

There has not been a home winner in Scotland on the European Tour since Paul Lawrie won the 2012 Johnnie Walker Championship at Gleneagles, but Forrest and Hill have improved the prospects after climbing to 18 under at Fairmont St Andrews.

Forrest began the day seven shots behind overnight leader Lucas Bjerregaard and his chances of challenging at the top of the leaderboard looked remote following an opening bogey.

But he responded with a brilliant birdie burst around the turn, which he continued on the back nine, to match the course record of 62 — which was set by Denmark's Bjerregaard in the second round — to set the clubhouse lead.

Hill started strongly and held a two-shot advantage early in the round but Forrest's birdie run saw him trail his countryman by two strokes with four holes to play after bogeys at the 10th and 14th.

Hill, who was born less than 25 miles (40 kilometers) from the course, regained his composure with birdies at the 15th and 18th to join his compatriot at the summit, with fellow Scot David Law in close proximity at 16 under.

Hill birdied the second just as playing partner Bjerregaard double bogeyed the same hole to sit at the top of the leaderboard.

An eagle at the next saw Hill extend his lead to two as Bjerregaard picked up a shot and the Scot climbed to 18 under after birdies at the sixth and seventh.

Forrest, following an opening bogey, made his move with a gain at the third before carding six straight birdies from the sixth. He missed another birdie putt at the 12th but picked up another shot at the next.

Hill slipped to 16 under after dropping his first two shots of the week, while Forrest was at the summit on his own after gains at the 15th and 16th.

He briefly extended the lead to two shots with his 11th birdie of the day at the last, but Hill joined him at 18 under with late gains.

Spaniard Santiago Tarrio is the Scottish duo’s closest rival at 17 under, with Law and two-time European Tour winner Bjerregaard one shot further back.