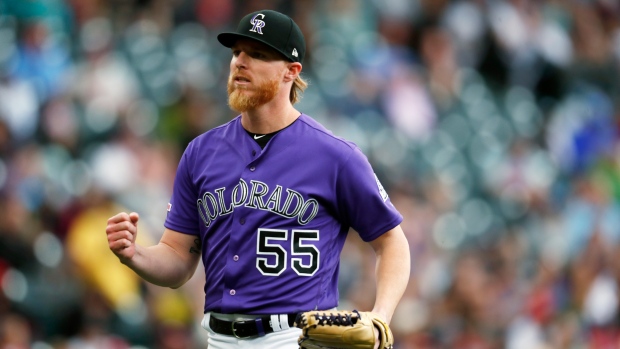 DENVER — Jon Gray found a way to dispense with all the traffic on the bases.

Pitching out of trouble when he had to, Gray threw six scoreless innings, Tony Wolters had a two-run double and the Colorado Rockies beat the Philadelphia Phillies 4-1 Sunday for their sixth win in seven games.

Trevor Story and Ian Desmond also had RBI singles for the Rockies, who won three of four against the Phillies for their second series win of the season and first at home.

Bryce Harper drew a leadoff walk in the Phillies eighth and has reached base safely in all 21 games to start the season.

The Phillies got a two-out RBI single from pinch hitter J.T. Realmuto in the ninth and had two runners when Wade Davis retired Cesar Hernandez on an infield groundout.

Grey (2-3) allowed one hit in six innings, a double by Maikel Franco in the fourth. He struck out five and walked four in winning his second in a row after losing his first three decisions.

Carlos Estevez, Scott Oberg and Davis finished up with an inning apiece.

"We didn't a whole lot of great stuff today," said the Rockies' Charlie Blackmon, who had three hits and walk. "Tony Wolters got some really good hits, outside of Jon Gray just dominating. I felt like he went out and shut them down. He kind of put us on his back and won the game for us."

Timely pitching and a baserunning gaffe by the Phillies helped him get out of trouble in the fourth, when Rockies second baseman Garrett Hampson had two errors, and he leaned on his arm again in the fifth when he issued consecutive one-out walks before retiring Andrew McCutchen and striking out Hernandez.

"I just had to settle down, take a breath and get back to what I had been doing," Gray said. "I'm just going right at them now, attack and make good pitches and let them get themselves out. The mistakes are not going to come from me."

Jerad Eickhoff (0-1), making his first start of the season after beginning the year on the 10-day injured list with a right lat strain, allowed four runs on seven hits in six innings. He struck out eight and walked four, including two in the Rockies' three-run sixth.

"There was a lot of positives," Eickhoff said. "I can think of one or two negative things that affected the game in a pretty big way. But those are things I can control, I can adjust. It's a really positive thing to build on, for sure."

Three consecutive two-out singles in the third gave the Rockies the lead. David Dahl started the string, advanced on Nolan Arenado's single and came home on the hit by Story, who extending his hitting streak to 10 games. It's his fourth career hitting streak of 10 or more games.

Colorado added three runs in the sixth. Eickhoff issued consecutive walks to start the inning and Desmond followed with an RBI single. Wolters drove in two more with a double that rolled to the wall in right-centre field. Wolters was thrown out trying to reach third.

The start of the game was delayed 33 minutes because of rain.

CAUGHT IN A RUNDOWN

A baserunning mistake cost the Phillies a prime scoring opportunity in the fourth. Hernandez reached on Hampson's fielding error and one out later, Hampson dropped Story's toss to what looked to be a double play grounder. But Hernandez apparently didn't see Hampson drop the ball and wandered off the base toward third.

Story quickly retrieved the loose ball to start a rundown that ended in Hernandez being tagged out trying to get back to second. "It is ultimately my fault," Hernandez said through a translator. "I know better. I should've stayed on the base until I was 100 per cent sure if I was out or safe. I just assumed I was out. It's a learning experience for me, and hopefully it won't happen again."

Rockies: LHP Tyler Anderson (0-2, 11.00 ERA) is expected to be reinstated from the 10-day injured list Monday and start the series opener against the Washington Nationals. Anderson has been on the IL since April 7 with left knee inflammation. ... INF Daniel Murphy has begun a rehab assignment with Triple-A Albuquerque, playing seven innings and getting five at-bats. He was placed on the injured list April 1 after breaking his left index finger diving for a groundball in the second game of the season. Murphy, a free agent acquisition, signed a two-year deal with Colorado on Dec. 21.

Phillies: RHP Jake Arrieta (3-1, 2.25 ERA) is slated to start the series opener at the New York Mets on Monday night.

Rockies: No official announcement has been made but it is anticipated that LHP Tyler Anderson (0-2, 11.00 ERA) will be reinstated from the injured list and start Monday night against Washington.