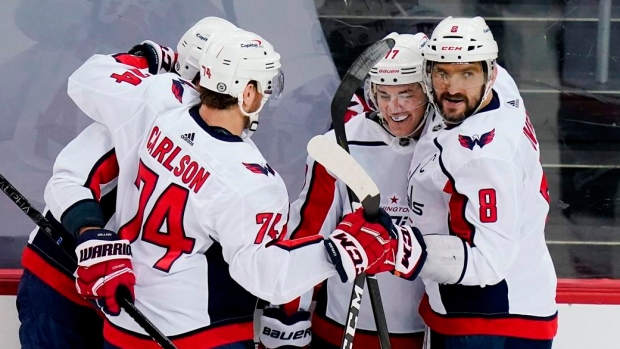 NEWARK, N.J. — The Washington Capitals came up with two Great 8s against the New Jersey Devils.

Alex Ovechkin hit another milestone in his amazing career and the Capitals finished off a rare eight-game sweep of their season series with the Devils with a 5-4 win on Sunday.

Ovechkin scored his 265th power-play goal to move into a second-place tie with Brett Hull on the NHL's all-time list in that category. He is 10 shy of passing all-time leader Dave Andreychuk (274).

Like most of his personal marks, he downplayed it.

“Keep going,” said the 35-year-old Russian who now has 725 goals, six goals shy of tying Marcel Dionne for fifth place all time in the NHL. “It is what it is.”

The Great 8 was more impressed with the sweep and the play of goaltender Ilya Samsonov, who had 35 saves in a game the Caps were outshot 39-19.

“I think Sammy today was unstoppable,” Ovechkin said. “Obviously he gave us the victory. ”

Caps coach Peter Laviolette said no one was thinking about a sweep at the start of the season.

“You hope to play somebody once and work hard and get one win and through the course of the year at the end of the year there will be a result," he said. "But they’re a good young team.”

T.J. Oshie, Conor Sheary, Carl Hagelin and Evgeny Kuznetsov also scored for Washington. The eight-game sweep was the first in team history against a single opponent.

After Zajac and Oshie scored in the first period, Sheary gave the Caps the lead at 3:21 of the second period with a shot that deflected off the jersey of Devils defenceman Damon Severson and fluttered into the net.

Ovechkin stretched the lead to two goals, slam-dunking the rebound of Nicklas Backstrom's shot that slipped through Blackwood's pads. The power play was set up when Dmitry Kulikov high-sticked Ovechkin in the face.

“He’s going to be a legend in the game," said Devils defenceman Ryan Murray said of Ovechkin. “You know, it’s our job to shut him down. But, of course, you appreciate what he’s done over his career.”

Sharangovich got New Jersey within 3-2 late in the second period but Hagelin and Kuznetsov scored early in the third to stretch the margin to 5-2. Bratt and Zajac got the Devils within a goal with 4:07 to play. They never got closer.

“I would say tonight we probably created the most opportunities we’ve had all year,” Devils coach Lindy Ruff said. “And at the end of the night, we didn’t win a game.”

Kyle Palmieri may have played his last game with the New Jersey Devils.

The team said the right wing, who will be a free agent at the end of the season, was held out of Sunday's game for precautionary reasons. Stephen Bartlett, his agent, said the move was made in anticipation of a trade in the coming days or week(s). The trade deadline is April 12.

Palmieri has scored at least 24 goals in each of his first five seasons with the Devils. The 30-year-old got off to a slow start this year and has eight in 34 games. His 140 goals since 2015-16 are the sixth most for a right wing.

The Caps eight wins against New Jersey marked the 13th time since the expansion era (1967-68) a team has beaten an opponent eight times in a season. It was the first time since 2007-08 when the Canadiens won eight against the Bruins.

Capitals: at Islanders on Tuesday. It's the finale in a string of 11 straight games against the three New York City metropolitan area teams — the Devils, Rangers and Islanders.