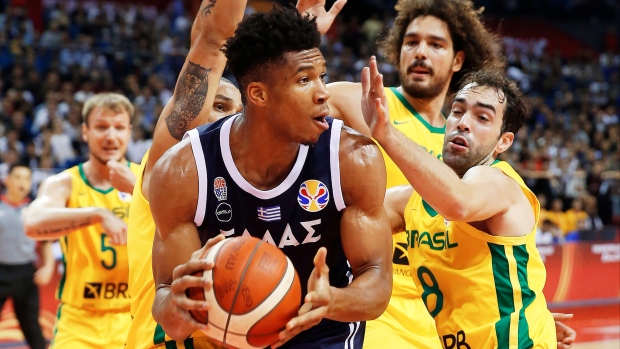 Pitino officially took over as coach of the Greek national basketball team on Monday. He said he would leave a roster place open for Antetokounmpo in qualifying games but is not sure if he will be able to rely on his best player.

Greece will try to reach the Tokyo Olympics by winning a qualifying tournament. But the dates could clash with the NBA schedule, probably ruling out Antetokounmpo.

"It is a possibility he will not be playing with us in the qualifying round if he goes far (in the playoffs). I understood that coming into this situation, and that's why it's such a high mountain to climb," Pitino said. "But Giannis is something, it's a bridge we have to cross later on. But we are going to leave a roster spot even if he has to take my place."

Pitino said he hoped to meet Antetokounmpo and his brother, Milwaukee teammate Thanasis Antetokounmpo, in March when the Bucks travel to Miami.

The 67-year-old Pitino is a veteran of the college game and the NBA, coaching the Boston Celtics and the New York Knicks as well as Kentucky and Louisville. He has returned to Greece after coaching Athens club Panathinaikos last season and remains popular.

"(Coaching Greece) is the crown jewel for me as a basketball coach," Pitino said. "This is one of the greatest honours I've had as a coach. I consider this so special because it's a mountain that is so worth climbing.

"And for the next eight months. I'm not American. I'm not Italian. I'm Greek. And that's the way I'm going to carry myself. You won't see anybody who will bleed every possession like I will bleed to try and win a game."