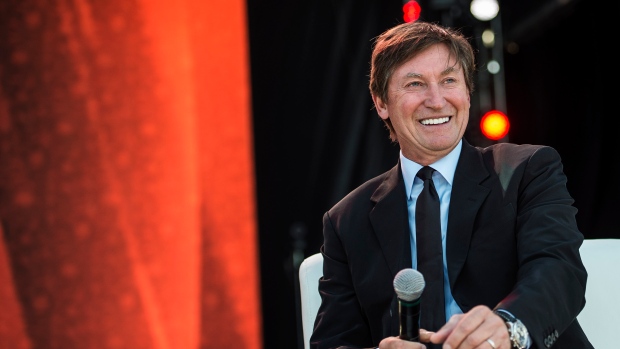 To celebrate the 100th season of the National Hockey League, commissioner Gary Bettman needed a special figure to serve as the “official ambassador” as the league rolls out various events and fan experiences starting in January.

His quest for someone both recognizable and well-versed in the history of the game ended with one phone call to the most decorated player in NHL history – Wayne Gretzky. Unveiling his role at a press conference Tuesday, Gretzky officially stepped back into the spotlight after years without a stated role within the league. But Gretzky has always remained committed to his former craft, and is a frequent visitor to Toronto’s Hockey Hall of Fame. But even in those hallowed halls, where he was immortalized in 1999, Gretzky can go incognito.

“A couple years ago I took my son...I had a hat on and I went into the Hall of Fame and I just told him ‘Keep your head down’ and we walked around for two hours,” Gretzky said. “We saw everything there was to see, then went down to the part when you can interact and take some shots. My son got out there and went 4-for-5 and so he says ‘Dad, try it’ so I go ‘Okay.’ I got out there and I missed the first three shots I took. And the young man who was running the line comes over to me and says ‘Sir, if you move your hand down the stick a little bit...’ and I lifted my hat and said, ‘Go get me one of those pucks in [that display], there’s 802 of them.’”

Gretzky’s career goal total – 894 all told, but 802 put him one past Gordie Howe for the all-time record – is one of many reasons Gretzky and the league have joined forces. Calling himself “a huge historian of the game,” Gretzky will take his passion for the sport that made him famous on the road to attend events throughout the celebration, starting here in Toronto.

On January 1, 2017, the Centennial Classic between the Toronto Maple Leafs and Detroit Red Wings at BMO Field will kick off the NHL’s 100th year celebration and include the unveiling members of the 100 Greatest Players from the NHL’s early years (1917-1967).

The NHL will reveal the 100 Greatest NHL Players of all time, voted on by a panel made up of former and current executives, media members, and NHL alumni, at the All-Star Weekend in Los Angeles from Jan. 27-29. NHL deputy commissioner Bill Daly said the players will be introduced alphabetically, not ranked numerically.

There will also be visits to every hockey market in North America with a Centennial Truck Tour, a mobile museum for fans to experience. The NHL is also working on the logistics of outdoor games at venues in Ottawa and Montreal to cap off the celebration in December 2017, but nothing is set yet.

Gretzky’s presence throughout the centennial season is what Bettman hopes will add an extra layer of excitement, for fans and players.

“I have nothing but the utmost regard, respect and awe for Wayne,” Bettman said. “I know his love for the game and I also know his respect for the histories and traditions of the game. It didn’t take a lot of discussion…We’re thrilled to have him and he’s told me he’s thrilled to do it.”

With the World Cup of Hockey final between Canada and Team Europe set to begin Tuesday night, Gretzky mused on which of Canada’s international teams he most would like to have played on (the 1972 Summit Series team) and which current player he thinks is best in the league (Sidney Crosby). But true to the purpose of the day, Gretzky made plenty of mention of past stars, the ones who laid the groundwork for the league and who will be honoured in the league’s centennial year.

“Sports get better every 20 years. Our game is better now than it was 20 years ago,” he said. “Twenty years from now it’s going to be better than today. These kids today, I’m most proud of the fact they carry themselves with real class and dignity. Connor McDavid, Auston Matthews, Crosby, they’re really nice people. And that was passed down from guys like Gordie Howe and [Jean] Beliveau and Bobby Orr. It’s a great tradition in our sport, that the hockey guys are nice guys.

“I love the game. Everything I have in my life is because of the National Hockey League. This is a great year, a great celebration — not only for the teams, but for the individual players.”