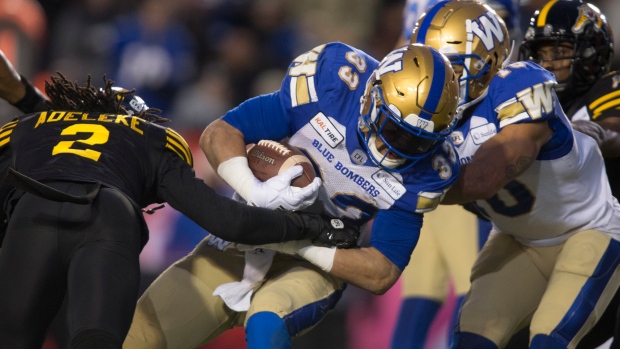 The Winnipeg Blue Bombers will kick off their Grey Cup defence in a championship rematch against the Hamilton Tiger-Cats on Saturday, June 13 - as announced by the Canadian Football League with the release of its 2020 regular season schedule on Monday.

The new campaign will begin with the return of Thursday Night Football as the BC Lions visit the Edmonton Eskimos on June 11, while a Friday Night Football doubleheader on June 12 has the Ottawa Redblacks hosting the Toronto Argonauts and the Montreal Alouettes facing the Calgary Stampeders.

The Saskatchewan Roughriders kick off their season in Week 2 hosting the Alouettes on Friday, June 19.

The Bombers' home opener will coincide with the Manitoba 150 celebrations across the province next summer. Winnipeg will host the Calgary Stampeders on Friday, June 26 – the evening before Unite 150, a free outdoor concert on the grounds of the Manitoba Legislature.

The Hall of Fame Game features the Redblacks in Hamilton to play the Tiger-Cats on Saturday, Aug. 15 – one night after the 2020 Canadian Football Hall of Fame class is inducted at Tim Hortons Field.

The Labour Day Classics come in Week 13, with the Roughriders hosting the Blue Bombers on Sunday, Sept. 6. The Tiger-Cats host the Argos and the Stampeders host the Eskimos on Labour Day – Monday, Sept. 7.

The Banjo Bowl in Winnipeg will be in Week 14, with the Bombers playing host to the Roughriders in their rematch on Saturday, Sept. 12.

For Canadian Thanksgiving, the Argonauts play the Alouettes in Montreal on Monday, Oct. 12.

The Argos will also play a neutral site game on Saturday, July 25, against the Roughriders, with the league to announce the host city at a later date.

The CFL Playoffs will begin with Semifinal Sunday on Nov. 8, with the East and West Finals set for Sunday, Nov. 15. Regina's Mosaic Stadium will host the 108th Grey Cup on Sunday, Nov. 22.