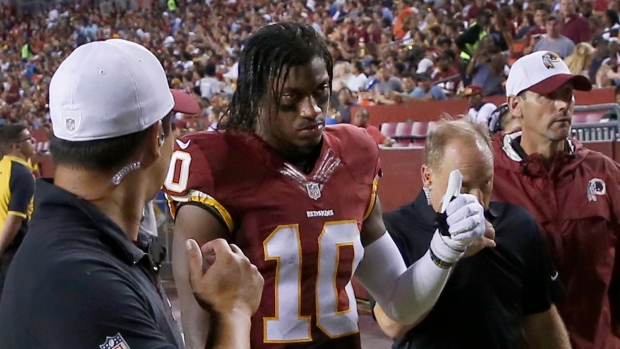 ASHBURN, Va. - Robert Griffin III evaded questions Thursday about when — or even if — he sustained a concussion in the Washington Redskins' second preseason game.

"You've got to talk to the people who report that stuff," Griffin said. "I don't report that stuff. I was in the locker room, taking a shower, getting ready to watch the rest of the game, so I don't know."

The Redskins said later Thursday that the quarterback was cleared by an independent neurologist to play Saturday night at the Baltimore Ravens in what could be his last preseason action.

So far, Griffin is 6 for 13 for 44 yards in two appearances, and the Redskins have not scored a touchdown with him on the field.

Last week against Detroit, Griffin left after four series, going 2 for 5 with two fumbles, three sacks and a few other big hits.

Speaking to reporters for the first time since that game, Griffin said Thursday he didn't know whether he was injured on his final play against Detroit, when he dropped the ball and then was hit as he tried to recover the fumble.

"I have no idea," Griffin said. "I just know I was in some pain, and the trainers came out, and that was it."

Asked whether he should have stayed in the game as long as he did, Griffin responded: "That's the coach's decision. As we like to say, 'I just work here, man.'"

After the game, coach Jay Gruden said Griffin got a concussion. He also said he left Griffin in the game because he wanted to give the first-team offence a chance to produce something positive.

In relief of Griffin, Kirk Cousins went 8 for 12, and Colt McCoy went 5 for 6, with both completing a touchdown pass.

"Is it the most important, do-or-die game of his life? No, it's not," Gruden said. "But as a quarterback you should go out there and take every play, thinking every play is equally as important as any other play you'll ever take."

Galette was injured toward the end of practice on Wednesday. He is scheduled to have surgery Friday.

He is the fifth Redskins player lost to a season-ending injury in the preseason, including tight ends Niles Paul and Logan Paulsen.

Washington signed Galette at the start of training camp after he was released by New Orleans because of off-field issues. He had 22 sacks for the Saints the past two seasons.