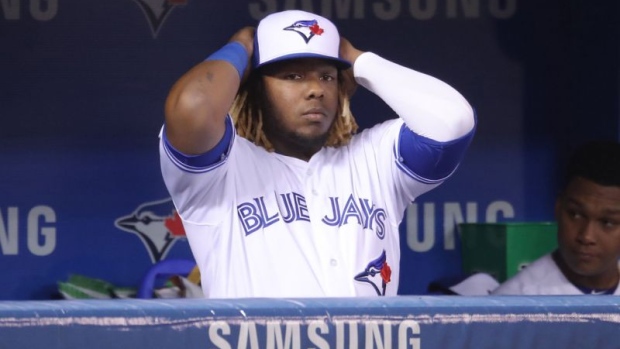 When Vladimir Guerrero Jr. was promoted to the majors on April 26, the Toronto Blue Jays were 12-14. Since then they have gone 11-25. That’s not an indictment of Guerrero or the team’s rebuilding process because it’s not a linear progression. Sometimes an organization will take one step back to take two steps forward. Sometimes it will even feel like they’re taking two or three steps backwards.

Before the season began I predicted the Blue Jays to be a fourth-place team ending up with about 68 wins. I knew at the time that I was bumping my win total up a bit because I just didn’t have it in my heart to predict 100 losses. The Jays are currently on pace for a 59-103 record.

This Major League Baseball season isn’t about wins and losses – it’s about trying to figure out who is part of the problem and who is part of the solution. The goal is to learn about the young players and what they are able to do.

Guerrero alone cannot carry the team to a better record. A case in point is the 2001 Texas Rangers. They were a last-place team yet had American League MVP Alex Rodriguez who hit .318 with 52 homers and 135 RBI that year. One man does not make a team.

Baseball is about a team’s entire 25-man roster and a dozen or more other players in their minor leagues who serve as depth and protection for the injuries and underperformance that occur during the season. It’s about the scouts and minor-league staff who keep grinding out thankless hours and days finding, signing and developing players for the future. This process takes time and patience not just for the organization, but also for the fans and media as well.

Hang in there, Blue Jays. The good times are not as far away as they seem right now.

Part of the Jays’ future will be decided by players who were selected in the MLB Draft this week. The club currently has more depth with position players than they do pitchers in the farm system and at the major-league level.

This year, the Jays drafted 21 college players, five junior college players and 14 high school players. They spent their top two selections on 6-foot-6 pitchers: Alek Manoah of the University of West Virginia and Kendall Williams from IMG Academy, a high school in Bradenton, Fla. They are both strong kids with the potential to be power arms in the Jays’ rotation.

Manoah has some mechanics to work on as he really flies open with his front side. He has a mid-to-high 90s fastball and is physically mature (260 pounds). He needs to refine his right-handed delivery to maintain a consistent release point so he can throw enough strikes. He should move quickly through the farm system.

Williams is an athletic-looking, loose, lanky right-hander with plenty of room to fill out physically. He has a projectable body and delivery. He throws his fastball in the 91-94 mph range but I expect that to increase as he fills out physically and refines his mechanics. He throws a slider, curve and changeup. I expect all four pitches to remain part of his repertoire with his curve ball as his best secondary pitch. He will take a year or two more to fulfill his potential but it will be worth the wait.

The Jays will say they picked the best players available but a team’s needs sometimes subconsciously help line up the order of preference of the players on the draft list. They need some pitching to go with their slew of position player prospects and they made that a priority in this draft.

In addition to Manoah and Williams, the Jays selected another young pitcher in the amateur draft that they knew would have no immediate impact on the organization. In fact, they drafted a player that they had no intention of signing.

In the 32nd round, they selected Braden Halladay, the son of former Blue Jay starter Roy Halladay. The Jays have made it a priority to stay connected to their former star’s family since his tragic passing at the age of 40 in November 2017.

This gesture is another effort to acknowledge the importance of the Halladay family to the club.  Halladay wore number 32 for most of his Jays’ career, so the selection in the 32nd round has significance.

Braden isn’t going to sign with the Jays as he is headed to Penn State University to play baseball. In three years maybe the Jays will be able to draft the young hurler again and let him pursue his baseball dream with his dad’s team. This was a classy move by team president Mark Shapiro and general manager Ross Atkins.

Free agents who receive a qualifying offer have draft pick compensation attached to their signings. Star pitchers Craig Kimbrel and Dallas Keuchel fall into that category. They both rejected qualifying offers from the Boston Red Sox and Houston Astros respectively. They both overplayed their hands in negotiations with teams, shooting for the moon in their asking price: Kimbrel wanted six years and $100 million; Keuchel wanted six years and $126 million. Clubs balked at their requests and they both remained unsigned though the winter, spring training and the first couple months of the season.

Once the season began, it became likely that they would take shorter-term deals. The problem for the players was that teams didn’t want to lose draft picks if they could only get the two pitchers on short-term deals. Once the amateur draft began the compensation obligation went away and Keuchel and Kimbrel could be signed without the loss of draft picks.

The Chicago Cubs moved quickly on Wednesday to make a deal with All-Star closer Kimbrel (three years, $43 million) to make him their closer.

The Atlanta Braves closed a deal with Keuchel on Thursday to join their rotation.

Both will take some time to get game-ready, but when cleared Kimbrel will take over the ninth-inning duties from Pedro Strop with the Cubs and Keuchel will add depth and experience to the Braves rotation.

The Cubs were fairly inactive in the off-season due to budget restrictions but they have saved some salary because utility man Ben Zobrist has left the team to deal with some family issues and has been placed on the (unpaid) restrictive list. That savings may have opened the door for the Kimbrel deal to get done. This move is huge for the Cubs as they needed to add depth and an upgrade to their pen. Once Kimbrel is ready, it will push everyone in the bullpen earlier in the game.

The deal may be the biggest save of Kimbrel’s career. He wanted far more money than what he received but getting that kind of deal after sitting out for more than a third of this season is pretty remarkable. It’s a good deal for the former Red Sox and a good deal for the Cubs.

Keuchel, who’s represented by Scott Boras, agreed to a one-year deal worth $13 million with the Braves. Surprisingly, Atlanta beat out the New York Yankees for his services.

It may be that Braves GM Alex Anthopoulos was able to leverage the relationship of veteran catcher Brian McCann, Keuchel’s former Astros teammate, to get the deal done. The 31-year-old lefty will take his physical on Friday and then pitch for Triple-A Gwinnett on Saturday.

Boras said his client has thrown seven simulated games of 100 pitches during the past several weeks and is almost ready to jump right into the rotation. Personally, I would like to see him make the start on Saturday and then make at least two more start in the minors. I would want to see how he recovers after a couple of starts to make sure his stuff remains at a high level. If not, then I would make decisions start by start in the minors until he looks ready.

- Yankees outfielder Clint Frazier had a tough week despite swinging the bat well (1.050 OPS in last seven games). He had a few defensive miscues in a Sunday night 8-5 loss to the Red Sox in the Bronx and he heard the boo birds loud and clear. After the game, Frazier was nowhere to be seen when the media wanted to interview him about his performance.

At that point, his poor defence became the least of his worries. The media revisited all of the faux pas that Frazier has had over the past couple of years, including some that weren’t completely accurate. A defiant Frazier didn’t apologize for his absence on Tuesday in Toronto when writers gathered around him in the clubhouse. Instead, he itemized the injustices he felt he had suffered at the hands of the media. He declared that he wasn’t obligated to speak to them. He even had a staredown with a reporter before walking away from the scrum, saying he was done talking.

The biggest mistake Frazier made over the past week is not speaking to the media and leaving his teammates to answer questions on his behalf. That is a no-no in a clubhouse, especially when the culprit is a young player, not the media. He’s walking around with resentment toward members of the media and fans because of what he deems unfair criticism. That bottled-up anger is only going to cause him more problems. He needs to let it go. He doesn’t seem to understand that any battle with the media is a losing battle – they always get the last word.

In New York, the fans and media will always hold you accountable for what you say and do.  But it is a forgiving city. If you own your mistakes, you gain respect. And when you turn it around you can earn redemption. In fact, the fans and media admire you more when you change the narrative. But you have to do your part.

Frazier may not have to worry about it much longer as I hear the media in Scranton/Wilkes-Barre (the Yankees’ Triple-A affiliate) are much more forgiving. As New York’s outfielders get healthy, he may be the choice to be sent to the minors. That is, if he isn’t traded before his demotion. He’s likely a guy the Yankees would include in a deal to add a starter to their rotation.

- The Phillies lost Andrew McCutchen to a torn ACL in a freak base running injury this week. He had shifted to centre field in Odubel Herrera’s absence and was the club’s leadoff hitter. Now, the Phillies are left trying to fill two very important roles.

I expect them to look outside the organization to fill their centre field hole. Kevin Pillar, who was traded by the Jays to the Giants earlier this year, would be a great option for Philadelphia. They will likely use second baseman Cesar Hernandez as the leadoff hitter for now.