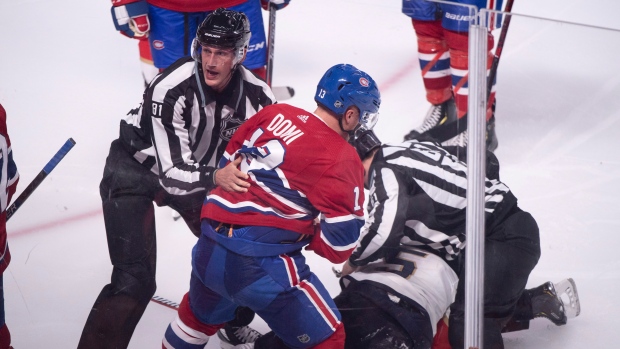 Montreal Canadiens forward Max Domi has been suspended for the rest of the preseason by the NHL's department of player safety for his punch on an unsuspecting Aaron Ekblad Wednesday night. The Habs have five games left in the preseason.

Domi was given a match penalty for punching Ekblad in the nose in the third period of Wednesday's preseason game between Montreal and Florida, which the Panthers won 5-2.

The department of player safety said the suspension was for "roughing/punch to an unsuspecting opponent."

Ekblad left Wednesday's game at the league’s request and did not return. He went through tests after the game and cleared concussion protocol.

With the Canadiens losing 2-1 at the start of the third period, Domi began tugging on Ekblad's shirt, asking him to fight. With the Panthers star showing no interest to drop the gloves, Domi rabbit punched him in the face twice, but still Ekblad didn't respond. That's when Domi dropped his right glove and sucker punched him on the nose.

"Bit of a gutless play. You don't do those types of things," Panthers goaltender Roberto Luongo said after the game. "I'm sure the league will look at it and we definitely won't forget about it.

"You don't do that. You respect your opponents and if your opponent doesn't want to engage in a fight, there's no reason to drop your glove and punch him square in the face."

Added Mike Hoffman: "I guess they were trying to showcase something over there. It's preseason, so maybe guys are trying to make an impression. But maybe do it by playing hockey."

Domi had previously been suspended once before in his career, in March 2016 for instigating a fight during the final five minutes of a game.

The 23-year-old was acquired by the Canadiens in June from the Arizona Coyotes for forward Alex Galchenyuk. He was making his Canadiens preseason debut against the Panthers.