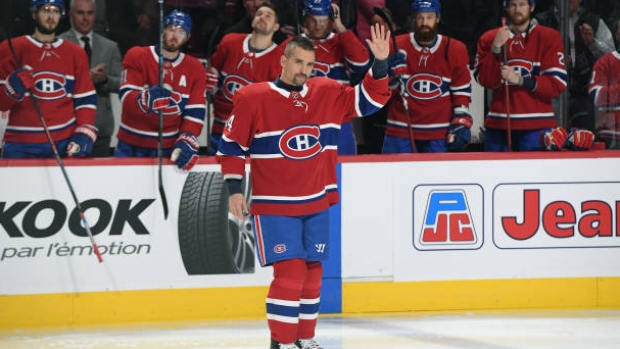 Tomas Plekanec said Friday he will retire from the National Hockey League after agreeing to have his contract terminated by the Montreal Canadiens.

The Canadiens announced earlier in the day that the forward would be placed on unconditional waivers for the purpose of terminating his contract.

“I always wanted to retire a Montreal Canadien,” Plekanec said Friday, noting Canadiens general manager Marc Bergevin had approached him about a trade this season.

The 36-year-old added he would consider continuing his playing career in the Czech Republic.

#Habs Plekanec says he still wants to play hockey this year and may consider suiting up for Kladno in his homeland of the Czech Republic.

Plekanec began the year as a healthy scratch for the Canadiens, but played his 1,000th NHL game on Oct. 15 against the Detroit Red Wings, scoring his lone goal this season. He had not played since October 18 due to a back injury. In three games this season, he scored the lone goal and posted an even rating while averaging 10:53 ice time.

"The organization made a hockey decision regarding the future of Pleky. It was a tough decision to make. Tomas will always be a part of the Canadiens family," Bergevin said Friday.

He said Thursday he saw the end of his time coming with the Canadiens due to their developing young core of Jesperi Kotkaniemi, Max Domi and Phillip Danault at centre.

Plekanec signed a one-year deal, $2.25 million cap hit to re-join the Canadiens on July 1 after being traded to the Toronto Maple Leafs ahead of February's trade deadline. He posted two goals and four points in the Maple Leafs first-round playoff series after having just two assists in 17 regular-season games with the club.

Bergevin said Plekanec will not count against the cap for the remainder of the season, since it was a mutual termination.

He made his NHL debut during the 2003-04 season, appearing in two games with the Canadiens. Plekanec became a full-time NHL player in 2005-06, scoring 29 points in 67 games. He also spent three full seasons with then-Canadiens AHL affiliate the Hamilton Bulldogs, appearing in 233 games and scoring 176 points.

He spent a total of 15 years with the franchise, reaching the Eastern Conference Final in both 2010 and 2014.

"I'm happy with what I've done here with the Canadiens," Plekanec said Friday. "I can leave happy."

Internationally, Plekanec won gold with the Czech Republic at the 2001 World Junior Championships along with one silver and two bronzes at the World Championships. He also appeared in two Olympics for the Czechs.