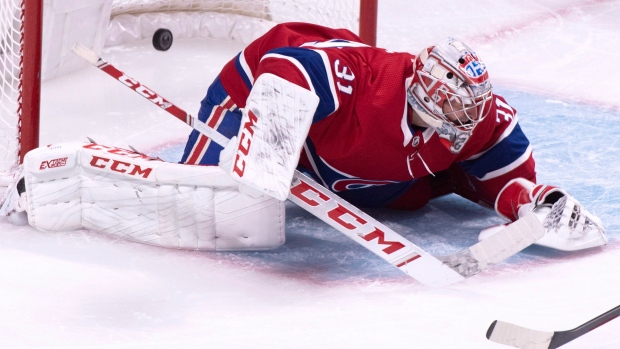 Montreal Canadiens goaltender Carey Price revealed Thursday the lower-body injury that forced him to miss the team's past three games had been bothering him for roughly seven weeks.

Price returned to practice on Wednesday, along with Antti Niemi and Michael McNiven, and took his usual net, relegating McNiven to the extra role.

Price has been out since Dec. 22 with a lower-body injury, which head coach Claude Julien called "more of an irritation than anything else."

The goaltender said Wednesday the three-game break was not planned, but with a flare up from the injury and the impending birth of his child, it was the "perfect storm" that led to him landing on injured reserve. He added that he could have continued playing through the injury had it been the postseason.

#Habs Price says his lower body injury has been bothering him for about 7 weeks, so he described the injury’s flareup last Thursday and his child’s impending birth as the “perfect storm” to stand down for the last 3 games. The break was not planned.

Julien said Wednesday that Price is expected to at least back up Niemi against the Vancouver Canucks on Thursday, though the gameday skate will determine if he's ready to start. Price said he expects to start against the Canucks.

Price was activated off of injured reserve and McNiven was assigned to the AHL later on Wednesday.