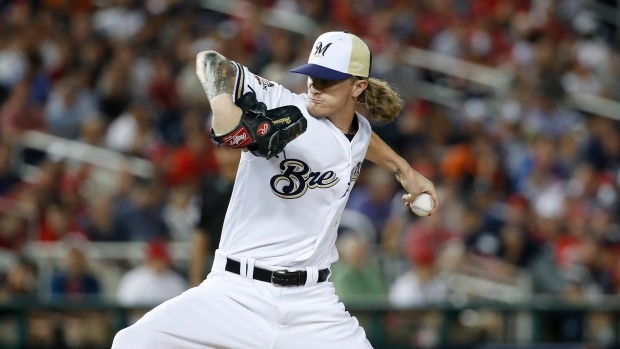 WASHINGTON — Major League Baseball said Wednesday that Milwaukee Brewers pitcher Josh Hader will be required to go through sensitivity training after years-old racist and homophobic tweets of his resurfaced during the All-Star Game.

MLB announced the commissioner's office would require Hader to participate in diversity and inclusion initiatives in addition to the sensitivity training. In a statement, Brewers general manager David Stearns said the team will continue to work through the issue with Hader.

Several of Hader's tweets from 2011 and 2012 came to light Tuesday night while Hader was pitching in the All-Star Game. Hader learned of the situation when he left the game. He apologized and took responsibility for the tweets, saying they did not reflect his values or the person he is now.

"During last night's game we became aware of Mr. Hader's unacceptable social media comments in years past and have since been in communication with the Brewers regarding our shared concerns," MLB said in a statement. "After the game, Mr. Hader took the necessary step of expressing remorse for his highly offensive and hurtful language, which fails to represent the values of our game and our expectations for all those who are a part of it."

The 24-year-old Hader said he did not "vividly" remember the tweets.

"Being 17 years old, you make stupid decisions and mistakes," Hader said Tuesday night. "I was in high school. We're still learning who we are in high school. You live and you learn. This mistake won't happen again."

Stearns said the Brewers were in contact with Hader, who is "fully aware of the severity of the situation related to his social media comments, regardless of the timeline of his posts."

"His comments are inexcusable, and he is taking full responsibility for the consequences of his actions," Stearns said. "In no way do these sentiments reflect the views of the Brewers organization or our community."

Stearns said those who have come to know Hader believe the sentiments in the tweets do not represent his beliefs, calling him a good teammate and contributor to the Brewers in every way. Hader has a 1.50 ERA in 31 appearances and made the All-Star Game in just his second major league season.

Hader spoke with Brewers teammate Lorenzo Cain after the All-Star Game. Cain said he expects the team to accept Hader's present-day statements and move on.

"At the end of the day, you've got to give people a second chance," Cain said. "You've got to forgive people. For me, it's over and done with. He said it. It got out there. I'm moving on from it."

On Twitter Wednesday, Brewers All-Star Jesus Aguilar expressed his support for Hader in a couple of posts.

"He made a mistake 7 years ago. He admitted, he apologized and most important: He learned from it," Aguilar tweeted. "Regarding accusations of racism: I'm Venezuelan and with the skin colour that I have, can tell you that it is a lie. Obviously he's not racist. He's a great player and a better person. Great teammate."

Hader, who grew up in Millersville, Maryland, outside the state capital of Annapolis, apologized when he spoke to reporters after the All-Star Game.

"There's no excuse for what was said," Hader said. "I'm deeply sorry for what I've said and what's been going on."