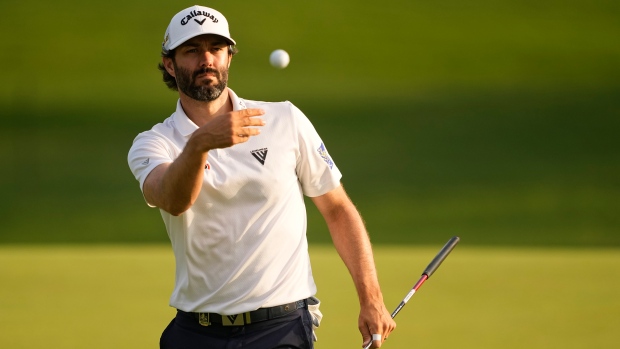 The end of Adam Hadwin’s week at the PGA Championship was a good one: a birdie on the 72nd hole.

But the other 71 holes? That left a little to be desired for the 34-year-old Canadian who ended up at 12-over and near the bottom of the standings.

“I’m pretty disappointed, obviously,” said Hadwin, who made just seven birdies for the week. “You never enter a tournament to finish in the 70s.”

The main struggle came off the tee where he only managed to find 32 of 56 fairways at Southern Hills, leaving him near the bottom of the driving accuracy category. As a medium-length driver, Hadwin needs to find fairways to allow the strengths of his game – iron play and putting – to shine. That’s especially so on a Southern Hills Country Club course playing 7,556 yards.

“I just didn’t have it,” he said. “This is a big boys ball park this week and if I’m not driving it well, I’m struggling to contend. That’s kind of what happened this week. From 100 yards, 125 yards in I can play with the best, I just have to find more fairways.”

While Hadwin will spend the next week trying to fix his driver woes, he is still bullish on his overall play. He has come a long way after making significant swing changes two years ago. He’s logged four top-10 finishes this season including three consecutively starting with the Players Championship.

“I think the game is in a good spot,” he said. “I’m happy with some of the shots I’m hitting. This place kind of wears you out with the length.”

The Abbotsford, B.C., product will play next at the Memorial before heading north for the RBC Canadian Open.

“Obviously the fans are going to be jazzed that we’re coming back up,” Hadwin said. “It’s been a couple of years so I’m really excited to be playing in front of them.”

The tournament is being played at St. George’s Golf and Country Club in Toronto, where Hadwin made his PGA Tour debut at the 2010 national championship. He compared the Stanley Thompson-designed course to Southern Hills but on a shorter scale.

As the final field for the Open takes shape, more and more players are asking Hadwin about the course and the location.

“We get one chance to play in Canada,” he said. “I think the buzz on tour is that guys are excited to see what St. George’s has to offer.”