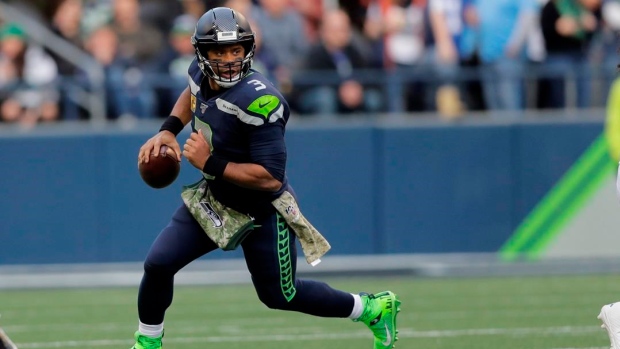 DENVER — Von Miller swears he has seen the future of football in Lamar Jackson , who is revolutionizing the quarterback position in the NFL's 100th season.

"He's so dynamic," Miller said. "He's showing you can win in this league with a running quarterback."

Miller said if he had an MVP vote, he'd give it to Baltimore's bustling quarterback, who knocked Tom Brady and the New England Patriots from the ranks of the unbeaten with an emphatic 37-20 statement Sunday night.

Miller doesn't get to vote, but Sirius XM's Pat Kirwan does, and he agrees with Denver's star linebacker about the Ravens' second-year QB who is the focal point of a run-oriented offence in a pass-happy world.

Jackson will have to do some more convincing down the stretch, though.

The Associated Press, which hands out the NFL's individual awards on the eve of the Super Bowl at the NFL Honors television show, polled eight of the 50-member voting panel this week and the other seven MVP votes all went to Seahawks QB Russell Wilson .

Here's what else they had to say as the league hit the halfway point of its centennial season:

"It's a three-player race right now, and Russell Wilson, Lamar Jackson and Deshaun Watson all are right answers," said Charean Williams of Pro Football Talk, who noted Wilson's league-leading 22 TD throws, one interception and NFL-best 118.2 passer rating, saying, "It's hard to argue with that."

No other QB has ever had a 22-to-1 ratio through nine games and only two other QBs — Dan Marino and Peyton Manning — topped 20 TD passes in each of his first eight seasons like Wilson has.

Jackson has run for 637 yards and five touchdowns and thrown for 1,813 yards and a dozen TDs. Like Wilson, he has proven adept at avoiding big hits by running out of bounds or sliding.

"The revolution is on," declared his coach, John Harbaugh. "For those who are paying attention, there's something pretty cool going on."

COACH OF THE YEAR

It's a two-man race between Kyle Shanahan and Sean Payton , although the 49ers have a much tougher home stretch than the Saints. San Francisco's remaining opponents are 36-22-1 for a .619 winning percentage and the opponents left on the Saints' schedule are 25-24 (.510).

"Kyle Shanahan, just barely over Belichick," said ESPN's Jeff Legwold , who cast one of five votes for the 49ers' third-year coach who has reversed his 0-8 start from two years ago.

"When Brees suffered a broken thumb, Teddy Bridgewater came off the bench and led New Orleans to a 5-0 record before Brees came back and threw for 373 yards in a 22-point win over the Arizona Cardinals," noted John Clayton of 710 ESPN Seattle. "It put on display just how well-coached the 7-1 Saints are."

The clear leader is 49ers QB Jimmy Garoppolo with four votes, followed by Rams WR Cooper Kupp with two. Both stormed back this year from torn ACLs that sidelined them last season.

"Jimmy G. has rebounded in a big way," said Ira Kaufman of Fox 13 in Tampa. "He guides the NFC's No. 1 scoring offence and has completed 71% of his pass attempts. His average of 8.0 yards per pass attempt ranks higher than both Aaron Rodgers and Tom Brady."

Williams voted for Kupp, noting: "The Rams might have had more offence in the Super Bowl if Cooper Kupp had played. Less than a year after tearing his ACL, Kupp has 58 catches for 792 yards and five touchdowns, all ranking him among the league leaders."

Ravens SS Earl Thomas and Cowboys C Travis Frederick also received some love from our mini-panel. Thomas is having an outstanding year in Baltimore after a broken leg ended his stay in Seattle, and Frederick is returning to his star form after missing all of last season because of Guillain-Barré syndrome, a rare autoimmune disease.

John Czarnecki of Fox Sports said McCaffrey is "keeping the Panthers competitive with an undrafted quarterback running the show."

Rams DT Aaron Donald got one vote and so did Gilmore's teammate, FS Devin McCourty, who was Rick Gosselin's pick.

The Bosas got the remaining votes.

DE Nick Bosa of the 49ers got the nod from Williams, who said the rookie is "a big reason for the team's turnaround."

Kirwan and Czarnecki went with Chargers DE Joey Bosa, whom Czarnecki suggested is "probably motivated by all the attention given to his younger brother."