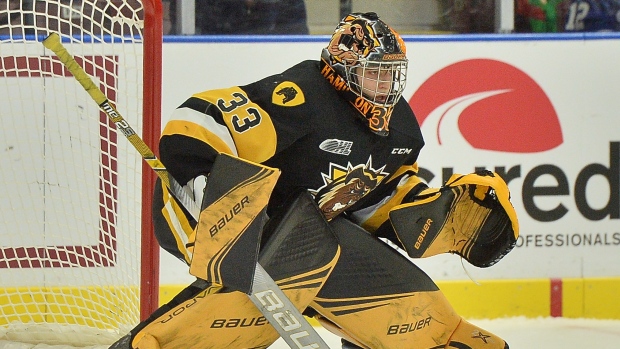 MISSISSAUGA, Ont. — Marco Costantini saved all 35 shots he faced to record the shutout as the Hamilton Bulldogs blanked the Mississauga Steelheads 3-0 Tuesday and come one win away from reaching the OHL Eastern Conference final.

George Diaco and Ryan Winterton both scored in the second period for Hamilton and Logan Morrison notched his ninth goal of the post-season with an empty-net goal at the 17:54 mark of the third.

Hamilton was the top team in the OHL this season, amassing 107 points and 51 wins.

The Bulldogs have played like it so far, outscoring their opponents 35-13 and going 7-0 over the course of the first two rounds.

Hamilton will go for its second straight series sweep Friday in Mississauga.

In other OHL playoff action Tuesday, the Windsor Spitfires took a 2-1 lead in their second-round series with the Kitchener Rangers with a 6-2 rout, the North Bay Battalion doubled up on the Kingston Frontenacs 6-3 to go up 2-1 in their series and the Soo Greyhounds beat the Flint Firebirds 3-2 to get on the board in their series. They now only trail 2-1.