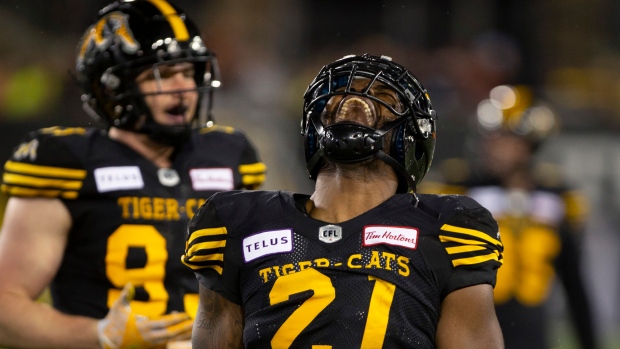 Simoni Lawrence's two-game suspension is likely headed towards an appeal or grievance by the Canadian Football League Players' Association, according to TSN's Farhan Lalji.

Hearing that the Simoni Lawrence suspension is likely headed towards an appeal/grievance by the #CFLPA. @CFLonTSN #TiCats #Riders

The CFL announced on Monday they suspended the Hamilton Tiger-Cats linebacker for his hit to the head of Saskatchewan Roughriders quarterback Zach Collaros.

Lawrence lowered his shoulder and made contact with Collaros’ helmet as the quarterback was sliding at the end of a run on the third offensive play of the game. Collaros remained on the turf for several minutes after the hit before walking off the field under his own power. He exchanged words with Lawrence, his teammate for four seasons in Hamilton, as he left the field.

Some context on potential Lawrence appeal:
Last year in Hebert case, PA decided not to support an appeal. He was a repeat offender, unlike Simoni. Hebert still could have appealed on his own but didn’t.
If it gets filed shortly, it should get ruled on before #TiCats game on Sat

"We all need to walk all of this talk in a meaningful way now, at the outset of our season, by sending and supporting a clear and unequivocal message on player safety," the league said in a statement following an offseason in which player safety was of high concern during CBA negotiations.

Collaros didn’t return to the game, getting replaced by backup Cody Fajardo, while Lawrence was assessed a 25-yard roughing the passer penalty on the play.

In an interview with TSN’s Matthew Scianitti after the game, Lawrence apologized to Collaros and said the hit was not intentional.

“It wasn’t anything personal about Zach,” Lawrence said. “It’s hard to stop when you’re running full speed. I love Zach to death. I feel really bad about it and it wasn’t intentional. Prayers to him and his family.”

Lawrence added he would let Collaros “cool off” after the incident before reaching out to him.