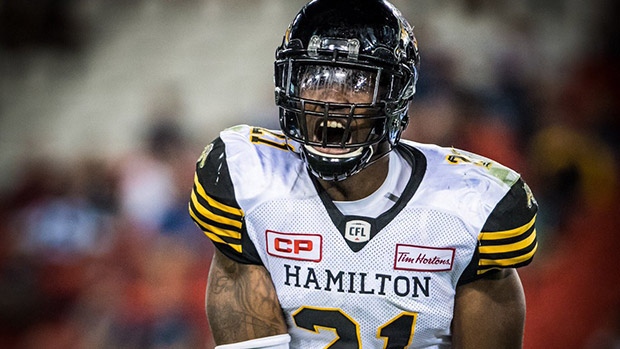 The outspoken Simoni Lawrence will be wearing a live microphone for the first time this week.

The Hamilton Tiger-Cats linebacker will be mic'd up by the CFL on TSN Saturday afternoon against the Ottawa Redblacks.

Lawrence returned last week after missing Tiger-Cats previous two games after an arbitrator upheld his suspension for delivering a hit to the head of Saskatchewan Roughriders quarterback Zach Collaros in Week 1. He logged eight tackles in the team's 35-34 win over the B.C. Lions.

In six games this season, Lawrence has 31 tackles, four sacks and two interceptions.

As per usual, the quarterbacks and head coach of each team will also be wearing live microphones, while linebacker Jerod Fernandez will be mic'd up on the defensive side of the ball for the Redblacks.