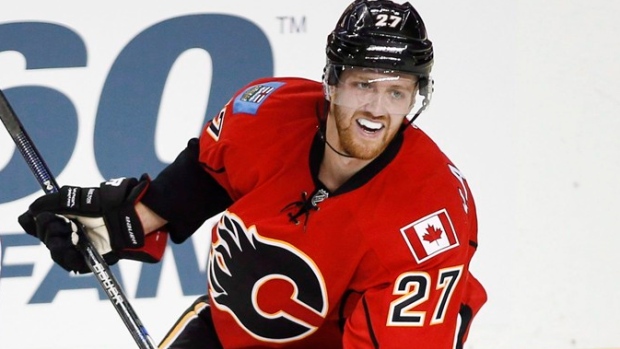 CALGARY - When the Hamilton brothers started their professional hockey careers and went their separate ways, they knew their dream of becoming NHL teammates was probably just that — a dream.

The last season Freddie and Dougie Hamilton played together was in 2012, as teammates on the Ontario Hockey League's Niagara IceDogs and Canada's team at the world junior men's championship in Edmonton and Calgary.

Now a couple of moves from Flames general manager Brad Treliving have increased the odds of the Hamiltons reuniting in Calgary and living that fantasy they'd had growing up.

Treliving acquired Dougie in a trade with Boston in June and signed the 22-year-old defenceman to a six-year deal.

Earlier this week, Treliving dealt a conditional draft pick to the Colorado Avalanche for Freddie's rights. The 23-year-old forward was assigned to Calgary's new AHL affiliate in Stockton, Calif.

"I don't think it's really sunk in yet that we have an opportunity to play together in a good organization like Calgary," Freddie said from Stockton. "Maybe it will sink in soon."

"We're in the same organization now," Dougie said. "There's still some hard work to be done, but hopefully it's one step closer to our dream of playing together."

The ninth overall pick in the 2011 draft by the Bruins, Dougie jumped directly from major junior to the NHL. A six-foot-five, 212-pounder who can skate and move the puck is a top-four defenceman on any NHL club.

Treliving gave up Calgary's first three picks, including a first-rounder, in the June draft to land him.

Freddie has spent most of his pro career in the AHL trying to gain a foothold in the NHL. A fifth-round pick of the San Jose Sharks in 2010, the six-foot-one, 190-pound forward got in a dozen games with the Sharks before he was dealt to the Avalanche.

Freddie had a goal in 17 games with the Avs last season.

"He's a smart, two-way player, hard-working and does the little things and all that stuff," was Dougie's scouting report." He can kind of play any role, versatile.

"I don't want to look too far ahead. Who knows what's going to happen, but it would just be cool if we had the opportunity."

The brothers say one of the best moments in their hockey lives was the day they were both named to the Canadian junior team.

"We were really hoping that we both made it and not just one of us," Dougie said. "That would have made it kind of weird, but we were lucky enough to both make it."

With the Flames' dressing room as their digs, Canada lost a wild semifinal 6-5 to Russia despite scoring three goals in the third period. The host team settled for the bronze medal with a 4-0 shut out of Finland.

"It was pretty disappointing when it ended actually just because we were having so much fun playing in Calgary in a great city with such good fans," Freddie said.

"If I had to talk about Calgary, from what I remember, it was the whole place packed in red to support Canada. I can kind of picture that being for the Flames too."

The brothers were born in Toronto and spent their teens in St. Catharines, Ont., where the IceDogs are based.

Their father Doug rowed in the 1984 and 1988 Olympic Games, winning bronze in 1984. Their mother Lynn played eight years on the Canadian women's basketball team and finished fourth at the 1984 Games.

"They might even be the most excited," Freddie said of their parents. "We're a really tight family. They follow us really closely, so it would be a huge dream come true for them to see us play on the same team."

The parent club is deep up front so it would likely take a run of injuries and Freddie standing out in Stockton for a Hamilton brother reunion at Scotiabank Saddledome.

"There's a lot of great players up there and down here, so there's a lot work to do," Freddie said. "A lot of motivation too.

"One of our best moments in our lives could happen again."