One of the most painful realities of a potentially lost National Hockey League season is the fact that Canadian teams were going to be well-represented in the playoffs – an occurrence that’s been hit or miss over the last decade.

At the time play was halted, the majority of Canadian teams were trending towards postseason bids.

Consider the playoff chances of each organization as of March 11, 2020:

In aggregate, it was an impressive year for teams north of the border, and that’s even true for teams like the Senators, who have started to show signs that a lengthy rebuild is progressing relatively well – one ripe with young assets and three first-round picks in the upcoming draft.

With time available, I decided to go through and hand out team MVP awards to each of the seven Canadian teams. Is the Travis Yost Trophy – awarded annually to the player judged most valuable to his Canadian team – more valuable than the Hart Trophy? Probably.

Here is each team’s winner:

Picking between Draisaitl and McDavid would have ordinarily been impossible, but there are a few factors that give Draisaitl the edge. The first and perhaps most obvious one is availability. Draisaitl and McDavid had eerily similar production on both sides of the ice, but Draisaitl ended up playing seven more games and 100 more minutes than his star counterpart. With that comes added benefit: Draisaitl will presumably end the season 13 points better in the box score numbers and three net goals better in on-ice goal differential.

One thing that I think is worth mentioning – perhaps because it was such a popular topic during the regular season – concerns Draisaitl, his Hart Trophy candidacy, and how we should analyze a player with such disparate offensive and defensive splits. I think there are a few truisms here. One, Draisaitl’s offensive production – and McDavid’s too – far outpaces any defensive limitations they have right now. Two, we ultimately care about net goal differential, and for as long as both of these skaters are scoring at such a ridiculous clip, their on-ice numbers will remain positive. Three, the defensive play was an issue. Despite being in the 95th percentile in on-ice scoring, the group was around the 68th percentile in net on-ice scoring. That is a legitimate criticism.

Muzzin would have had an interesting claim if he hadn’t missed so many games – Muzzin broke his foot in a December game against New Jersey and then broke his hand blocking a shot in a February game against Tampa Bay. That said, in the 53 games he did play, Muzzin was certifiably fantastic on the defensive side of the ice. For a Maple Leafs team that struggled to find defensive balance all year, Muzzin was one (positive) exception.

But with so many games lost, there really isn’t any argument for another player outside of Matthews. He had a legitimate chance at winning the Rocket Richard Trophy (and would have made me look smart for once in the process). He has developed into one of the league’s most dynamic offensive talents, an exceptionally dangerous shooter who needs very little time and space to get off his patented wrist shot. What may be lost in Matthews’ season is the fact that Toronto was actually quite good from a defensive standpoint with him on the ice. Matthews was near the top of the leaderboard when it came to on-ice goals against, expected goals against (goaltender neutral), and shots against.

He’s simply one of the best players in the game. You can count on one hand how many players you would take over Matthews today.

Unlike a few of their Canadian counterparts, the skater group in Calgary was much more balanced when measuring production. That makes identifying candidates a bit more difficult, particularly from a group of forwards who didn’t do much to separate themselves from one another.

Take Tkachuk for example. He was clearly the team’s most productive offensive player, true both at even strength and on the power play. But despite those offensive numbers, Tkachuk was outscored at 5-on-5 (-2). Compare that with a defensive workhorse like Brodie (+5 actual goals; +7 expected goals), who saw Calgary outscoring their opponents with him on the ice all season long.

The Brodie pairing – he again played the majority of his ice time with Mark Giordano – has been solid for the Flames for years now and one of the key reasons why this team has been a regular playoff threat for the past few seasons.

Of the seven teams, this was the easiest choice. It may be the easiest choice for any team in the league. Vancouver’s was a top-heavy team all season long, but their first line – anchored by Pettersson – was one of the most dominant groupings in the league, and was good enough to overwhelm the depth issues this team had for much of the year.

If you are into more advanced regression-based measures like Goals Above Replacement, Pettersson somehow comes off looking even better than he normally would by way of scoring totals or on-ice differentials. What you find through these regressions is that teammates are materially better when playing with Pettersson, and when moved to other lines, see performance drop-offs well below expectations.

At the time the season was halted, Pettersson was nearly 24 goals (approximately four wins!) better than a replacement player, which was the second highest number in the league. The only player ahead of him? A similarly situated one-man band in the form of Rangers sniper Artemi Panarin (25 goals above replacement).

Pettersson’s arc – he is a full year behind Matthews, two behind McDavid – is going to be interesting to follow. At 21, he is already a superstar in this league. The question now is where is his ceiling, and how can Vancouver surround him with even better complementary talent as the team prepares for his second contract?

Scheifele comes off looking like the best skater on this Jets team, but everyone in Winnipeg knows that this team’s success came by way of goaltender Hellebuyck.
Hellebuyck – assuming awards will be given out regardless of what happens with the season – seems like a lock to win the Vezina Trophy. He stopped 92.2 per cent of shots and played in 58 of Winnipeg’s 71 games. While an 82 per cent appearance rate might seem high, consider the league’s trend towards load management for goaltenders and how little other primetime goaltenders played, relatively speaking. For quick reference: New York’s Semyon Varlamov was at 66 per cent, Dallas’ Ben Bishop was at 64 per cent, Boston’s Tuukka Rask was at 62 per cent. You get the point.

Another thing to consider: Hellebuyck’s 92.2 save percentage is fantastic, but he did it behind a shaky defence. That save percentage alone puts him 21 goals above average, and adjustments for shot quality don’t change those numbers any – Evolving Hockey had Hellebuyck at 20 goals saved above expectations, more than double our second-place goaltender in Arizona’s Darcy Kuemper (+9).  Just look at this heat map of where shots had fallen over the course of the season! 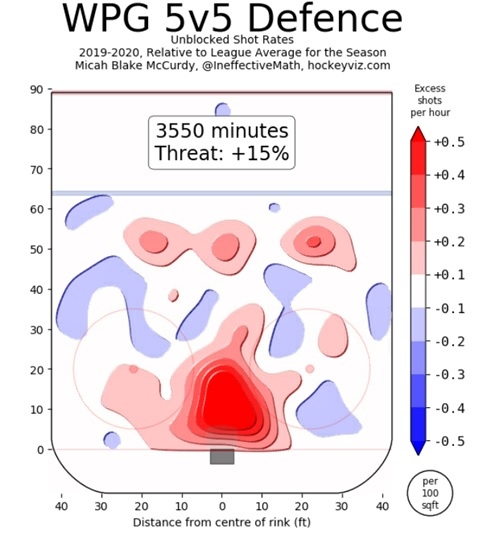 Hellebuyck is one of the best goalies in the league. Winnipeg would have been at the bottom of the division without him. This one is rather simple.

Picking between Gallagher and Domi is only difficult because Gallagher missed some time this year – Domi ended up playing 12 more games over the course of the season. But despite that 12-game differential, Gallagher’s production was equivalent (or better) than Domi’s on both ends of the ice.

Tomas Tatar will be a notable omission – he had a fantastic year and was probably the hardest name to leave off across the seven Canadian clubs. But outside of the counting totals, Tatar struggles head-to-head with Gallagher. The team was about 10 per cent less effective offensively with Tatar on the ice relative to Gallagher, and many of Tatar’s counting numbers came by way of secondary assists – 21 of those in total, or 35 per cent of his total scoring. He was also a penalty magnet: his -11 penalty differential was sixth worst amongst forwards in the league, a combination of him taking untimely penalties and failing to be able to draw many from the officials.

I’m not sure how to handle J.G. Pageau’s candidacy – he was clearly the best player on the Senators this season, but as a result of his trade deadline move to Long Island, he is no longer on the roster. That opens up a debate between forward Tkachuk and defenceman Chabot, and honestly, this is the closest thing to a coin flip as I can find.

While Tkachuk was the team’s most productive offensive player (and his penalty rates were sterling), his on-ice differentials were less impressive. Ottawa gave up 2.9 goals against per 60 minutes with Tkachuk out there, fourth worst amongst Ottawa skaters. Tkachuk’s expected goals against rates were in line, so this wasn’t exclusively a goaltending performance issue.

The thing about Chabot that gave him the edge by way of tiebreaker  for me is just how difficult his job was. This Ottawa team has been strategically gutted, and only recently has the organization been able to introduce their young talent – most of which is at the forward position – into the lineup.

Tkachuk spent most of the season playing with the likes of Pageau and Connor Brown, two capable middle-six forwards that can play complementary roles with most impact forwards in the league. Chabot, on the other hand played most of his pairing minutes with immobile defenders like Ron Hainsey and Nikita Zaitsev. That’s a tough assignment for any player in the league.

There isn’t a wrong answer here. And I don’t think Ottawa will lose sleep over deciding which of their two young stars had the better season, all things considered!