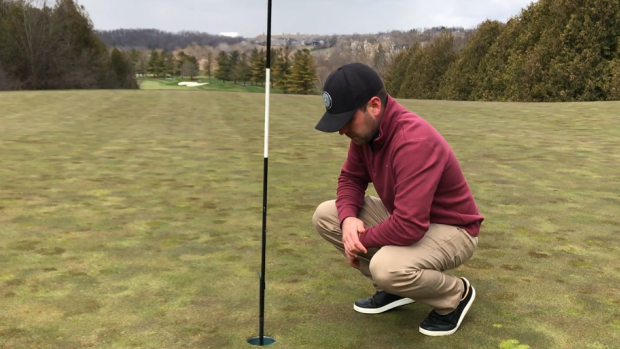 As the old saying goes, necessity is the mother of invention. That’s definitely the case in these pandemic times, where the world finds new ways of doing old things.

For three golfers in Kitchener, Ont., a new creation will not only go a long way towards making the game safer, it’s also keeping the doors open at a family business.

The Pin Caddy is a small unit that lets golfers lift the ball out of the cup without touching the pin or digging their hand into the hole. It’s the perfect solution for a problem facing golfers as courses re-open province by province.

“It’s a device that goes on to the flagstick and it drops down into the hole,” explained James Skrypec, the head teaching professional at Deer Ridge Golf Course in Kitchener, Ont., and one of the three partners in the venture. “You can putt your ball down into the hole and eject it without touching the pin or the hole.”

Pin Caddy 2.0. We have added a rubber coating to the lever. 380 units sold in 24 hrs. Thank you for all of your likes and shares! Help us be part of the solution! #pincaddy pic.twitter.com/P3DReGYvfw

The unit works by a golfer using his or her club to slide the Pin Caddy up the flagstick and bringing the ball from the bottom of the cup. There’s no touch point for golfers.

Most courses that are open have raised the cup so the ball bounces off it or have placed a piece of foam, often a cut off piece of pool noodle, inside the cup to limit the depth the ball can drop.

The idea behind the unit came from brothers Zak and Kody Yoshy, two golf enthusiasts who also own a custom fabrication business in Kitchener. With no work in their shop, they began to talk about their favourite hobby.

“We got inspiration purely from all the chatter about golf courses being re-opened and what sort of challenges they’d be facing,” said Zak Yoshy. “We were confident we’d be able to come up with a solution [to the pin-cup issue] that would be very durable and also very functional to getting back to playing traditional golf.”

The two built a prototype and took it to Skrypec, knowing his contacts in the golf industry would be vital. After 15 different versions, they came up with a final model made of powder-coated, stainless steel. They then went to a patent lawyer to ensure they weren’t copying any product already in the marketplace.

“We were very happy and pleased that not only were we not infringing on anything, but our unit really stands alone in terms of what’s out there,” said Yoshy.

The next step was to go to market, and the reaction was immediate and positive. Orders started flying in from British Columbia where courses have never closed. As more and more provinces lifted restrictions on play, they had requests from across the country. To date, they’ve sold approximately 1,500 units at $35 each. More orders come in daily.

Covid-19 closure update #12: Golf Course Superintendent, @JamesRRobb shows us the new Pin Caddy system that was installed today so members can retrieve their ball from the hole hands free! pic.twitter.com/4SX8UiemEC

Courses such as Marine Drive, Cordova Bay and The Links At Crowbush Cove all plan to use the Pin Caddy.

There are even purchases being made from clubs in Nova Scotia and Ontario, where golf is still restricted.

The only bad news involves Saskatchewan where the ruling that allowed golf to return included a regulation stating that the only allowable method for the hole would be a raised up.

While making golfers happy is one part of this story, there is another positive aspect to it.

A few weeks before coming up with the idea, the Yoshy brothers were discussing closing down their business, one they’d operated for more than 20 years. There was no business and the prospects didn’t look good. The Pin Caddy came to the rescue.

“One hundred per cent this has saved our business,” said Zak Yoshy. “This is a dream come true.”

In addition, Yoshy said, after more than two decades of building projects for customers, they have something to call their own. And for three golf lovers, every time they venture out on to the course, they’ll be able to see and use their creation.