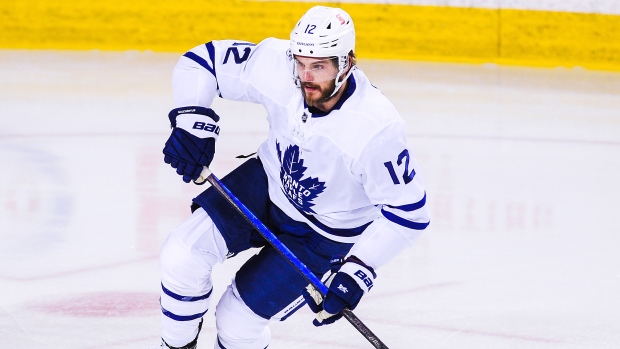 TSN Toronto Reporter Mark Masters reports on the Maple Leafs, who practised at Ford Performance Centre on Friday ahead of Saturday’s game against the Ottawa Senators.

With William Nylander out (COVID-19 protocol), Alex Galchenyuk is seeing his role with the Leafs grow.

Galchenyuk skated on the top line with Auston Matthews and Mitch Marner at Friday's practice while Zach Hyman shifted to the second line with John Tavares and Ilya Mikheyev.

"Not having ​Nylander breaks up that Tavares line that we had liked," explained coach Sheldon Keefe. "It is just a chance for us to get a look at Galchenyuk, who's been playing very well. [He] seems to pair well with John, but now that we feel pretty good about the fact that works for us, we want to see what this would look like."

Galchenyuk, who spent part of the off-season training with Matthews in Arizona, has started nine of his 10 games with the Leafs on a line with Tavares and Nylander, producing one goal and three assists. He's fired 18 shots on net and hit two posts.

"He's worked extremely hard," noted Marner. "He's brought it every single night and he's had a lot of chances that have just missed wide or been off by a hair. I'm excited to see how it's going to go tomorrow. Hopefully we get chemistry going right away."

A third overall pick in 2012, Galchenyuk's skill, especially a lethal shot, has always been apparent. So far in Toronto, the well-travelled 27-year-old is also showing a willingness to do the little things necessary to fit in on a contender.

"Extremely hard worker," said defenceman Zach Bogosian. "For a really skilled player, he gets in hard on the forecheck. That's one thing I've really noticed."

Galchenyuk's work ethic has been consistently praised by his new teammates. And, after Friday’s practice, he left for more extra work with the team's development staff on another pad.

"He's obviously very skilled, plays with speed," observed defenceman Morgan Rielly. "He likes playing with those other guys that are skilled and likes to make plays off the rush. He's a guy who enjoys playing the game and is always trying to get better."

Most of practice focused on special teams work. Toronto has converted on just one of 33 power-play chances over the last 13 games while also surrendering two shorthanded goals. The reps on Friday were game-like starting with faceoffs and with the scoreboard clock running.

"The power play looked good today," said Keefe. "I was happy with it. We haven't had a great deal of practice time here in the last little while. We wanted to make that more of a priority today. I thought both units looked really good."​

The team is currently rolling with two balanced units in an attempt to replicate the magic from earlier this season. When the calendar flipped to March, the Leafs owned the league’s second best power play striking on 32.5 per cent of chances.

Hyman and Wayne Simmonds, who serve as the net-front guys, have flipped units this week. Hyman is now with Matthews, Marner, Tavares and Rielly while Simmonds has shifted to the unit with Jason Spezza, Joe Thornton, Nylander and Jake Muzzin. Galchenyuk has now replaced Nylander on that unit.

"When you get a power play, you are more likely to have fresh people if more people from one or at most two lines make up the unit," Keefe explained. "If you have it spread out where it is two or three lines, you are likely going to have someone who is fatigued starting the power play and that is not optimal. That is really a big part of it. Now that we have moved Simmonds lower [to the third line] and Hyman higher with John in, it just flows better that way. There is not a whole lot to it other than that."

Hyman assisted on a power-play goal by Matthews in Calgary on Monday.

"Similar to Simmer, a guy that's not afraid to stand in front of the net and doesn't really care if you hit him with the puck," said Marner. "They're both able to take pucks off the body and somehow they find them and get those second opportunities. A guy that our power play is pretty familiar with. We’ve played with him quite a bit."

The Leafs failed to convert on a lengthy two-man advantage against the Canadiens on Wednesday with Keefe using a five-forward approach featuring Marner, Matthews, Tavares, Spezza and Hyman.

"It is not anything entirely new," said Keefe pointing out he's employed the tactic previously. "Five-on-three is a pretty rare occurrence so you kind of play it by ear. We went with five there, but today we didn't go with five. It is always an option for us."

Rielly replaced Hyman on the five-on-three unit at practice.

For the first time in this pandemic season, the Leafs are dealing with a COVID-related absence.

"The expectation is that [Nylander] is going to miss a minimum of seven days," said Keefe. "We will have to just kind of see how it goes."

Nylander had exposure to a possible positive case with a close contact outside the team and missed Wednesday's game for precautionary reasons as further testing was conducted.

"From what I've heard, the tests have come back negative, which is a great sign," said Marner.

Keefe stressed that Nylander did nothing wrong and was up front with the team.

"I talked to him after the game," revealed Rielly. "He was doing all right. He's just going to do whatever he's got to do. As a team, we're going to worry about playing a game tomorrow and doing what we can here today to prepare. He wants us to win so he'll be watching. I think he's doing okay."

"Things seem to be going in the right direction," added Bogosian. "You think about who he was in contact with and hope they're OK and everything stops there."

Nylander will miss at least the next three games. Toronto hosts the Ottawa Senators on Saturday before travelling to Montreal for another showdown with the Canadiens on Monday. Then the Leafs will head home to host the Calgary Flames on Tuesday.

T.J. Brodie scored his first goal as a Leaf on Wednesday night, potting the go-ahead goal early in the third period against the Canadiens.

"It took a little bit longer than I would've liked," the defenceman admitted with a smile. "It's just a bing-bang play where it hit off a couple feet and popped out to me and luckily it went in."

"Credit to him for just jumping into space there," the coach said. "When you do that you put yourself in a position if a bounce goes our way, you're right there to capitalize and that’s exactly what happened. Great sense to be there."

It was Brodie's first meaningful goal since he scored for the Flames on Aug. 14 during the playoff bubble.

Brodie matched a season high with three shots on net in Wednesday's game.

However, Brodie wasn't brought in for his offence. He was brought in to stabilize the blue line and so far the 30-year-old from Chatham, Ont., has done just that.

"He's got an unbelievable stick," Matthews gushed. "I feel like he breaks up so many plays and two-on-ones and odd-man rushes. He's so good at getting his stick on pucks and making simple plays. He's been a huge addition to our team. Defensively, he's as sound as it gets."

Brodie has meshed well with Rielly, who leads all Leafs defencemen with 27 points.

"He and Mo really enjoy playing with each other," Matthews observed. "It's really easy playing with those guys. They make quick plays with the puck."

With an assist from assistant coach Manny Malhotra, centre Pierre Engvall feels like he's making process at the dot.

"He's helped me a lot," the 24-year-old Swede said. "I'm doing faceoffs every day. He's giving me tips even on the bench during games. I feel like some games I've been doing really good and some games not so good, but I'll keep working on it."

Engvall, who never played down the middle before coming to North America, is still figuring out how to use his 6-foot-5, 214-pound frame to his advantage.

"I'm a strong guy so I try to use that in my favour to command the stick," Engvall said. "My timing is getting better and better."

Engvall is winning just 43.5 per cent of his faceoffs this season, but the number is 46.7 per cent in four games since the calendar flipped to April.