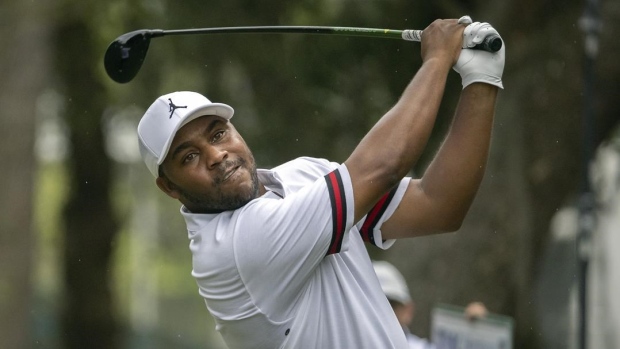 HILTON HEAD ISLAND, S.C. (AP) — Harold Varner III shot an 8-under 63 to take a one-shot lead in the RBC Heritage on Saturday in pursuit of his first PGA Tour victory.

Varner had eight birdies in a bogey-free round to match Cameron Young's opening score as the lowest at Harbour Town Golf Links this week. Varner had an 11-under 202.

Varner will need to be just as crisp Sunday. FedEx Cup champion Patrick Cantlay, 2019 British Open winner Shane Lowry of Ireland and Erik van Rooyen of South Africa were a shot back.

Varner has two international victories, winning the Australian PGA Championship in 2016 and the Saudi International in February.

He appeared to shoot himself out of contention with his Friday finish, going 4 over his final four holes for a 72. But it was a ruling on the sixth that angered Varner — and fueled him for Saturday.

Varner's tee shot on the par-4 sixth was called out-of-bounds. Varner told officials that he saw a spectator pick up the ball that was eventually identified as Varner's and he may have put it back beyond the out-of-bounds marker.

The decision stood, Varner made a double bogey and fumed about it. “I would say I'm really good at putting things aside, but I did not put that aside,” he said.

Instead, he used the frustrating finish to fuel his run to the top. Varner birdied four of his first six holes — including that troublesome sixth — and took the lead with a 10-footer on the 16th.

Harbour Town is far from Varner's preferred layout — “It's my favorite because we can drive here,” said Varner, who lives in Gastonia, North Carolina — even though he tied for second here last year and has shot in the 60s in six of his past seven rounds.

“I feel like I'm always kind of guiding it out there,” he said. “But if you can guide it out there for 72 holes, you can do some damage.”

Lowry, too, bounced back from a 72 on Friday to get within a shot of the lead. He was choppy at first, following birdies on the second and fifth holes with bogeys on the next one. But he steadied himself after that for a 65, matching his career low at Harbour Town.

Lowry said conditions, particularly the gusts of 20 mph or more Friday, had eased and made the usually tricky course defenseless.

“Yesterday was just kind of one of those days where you have to batten down the hatches,” Lowry said.

“Whereas today, I felt like any time you got a good number,” Lowry said, “you could really go at the flags. And I did and I hit some good shots.”

He'll need more of that Sunday if he hopes for his third career tour win and first since the British Open in 2019.

Cantlay ended Friday with a flourish — four straight birdies from Nos. 15-18, the toughest stretch of the course — for a two-shot lead.

But he couldn't find that form much of this round. He caught Varner with birdies on the sixth, seventh and ninth holes, then dropped back with bogeys on the 11th and 12th holes. He drew within a shot of Varner on the 18th hole, his approach landing inside 5 feet for a closing birdie.

“It had some good, it had some not so good,” Cantlay said. “But I’m in a really good spot for tomorrow. Especially with that closing birdie on 18, get a little momentum, and I’m obviously right there.”

Tommy Fleetwood, teeing off more than 3 1/2 hours before Cantlay's final pairing, posted a 64 to give first hint of the very gettable course.

Maverick McNealy and Peter Malnati, like Lowry, had 65s. Swafford, Wyndham Clark and Graeme McDowell posted 66s. In all, 45 of the 71 competitors came in under 70.