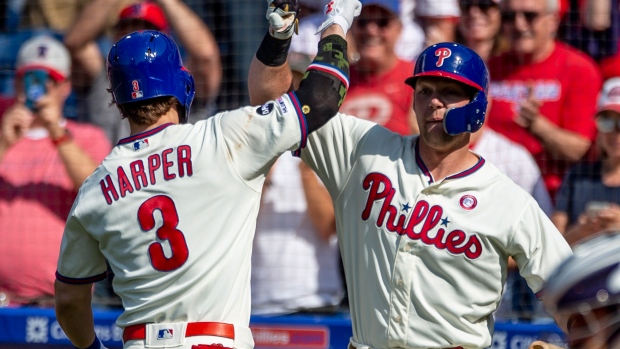 Harper homered over the batter's eye in centre field, Nola tied his career high with 12 strikeouts while pitching into the seventh inning and the Philadelphia Phillies defeated the Colorado Rockies 2-1 on Saturday.

Harper also doubled for the NL East-leading Phillies. But it was his majestic drive in the first inning that had everyone talking.

"It looked like it went over the stadium," Nola said.

Harper crushed the first pitch he saw onto Ashburn Alley, a fan walkway where only a few home runs have reached since Citizens Bank Park opened in 2004. The drive, his eighth of the season, was estimated at 466 feet.

Harper downplayed the length, happy enough to have cleared the fence.

"It's pretty cool, of course, but like (his former Washington Nationals manager) Matt Williams said, 'It's not how far, it's how many,'" he said.

Harper's impressive blast helped Nola to an early cushion, and he took it from there.

Nola (4-0) allowed one run on eight hits while walking one. The right-hander looked more like the pitcher who finished third in the NL Cy Young voting last season and not the one who has struggled for much of 2019 — he has a 4.47 ERA this year.

"It's what I remember when I was with the Nats (last season)," Harper said of Nola's performance.

While reaching double-digit strikeouts for the 10th time but first this season, Nola got past the fourth inning for seventh time in 10 starts.

"I felt pretty in control today, definitely smoother than previous starts," Nola said. "My command felt good and I was driving my fastball through the zone."

Tony Wolters had an RBI triple for Colorado, which has lost three straight.

"A little bit of lack of offence today," Rockies manager Bud Black said. "We had some chances, but didn't get the big hit."

"Best breaking ball he's had all year, I'm going to bet on that," Black said. "And his fastball had velocity, more than we've seen. It was evident of what we saw last year."

Nola breezed through six innings and Kapler elected to bring him out for the seventh despite 99 pitches. Wolters led off with a triple off the wall in right and pinch-hitter Ryan McMahon doubled off the wall in right-centre to pull the Rockies within 2-1 and end Nola's day.

Adam Morgan got the first out on a grounder that moved McMahon to third before Seranthony Dominguez came on and wriggled out of the inning.

McMahon ran on contact with the Phillies' infield in on Trevor Story's groundball to third and was thrown out at home. A single by David Dahl and walk to Nolan Arenado loaded the bases for Daniel Murphy, who grounded out weakly to short.

Philadelphia went in front 2-0 in the third with the help of the Rockies. Jean Segura walked, went to third on Rhys Hoskins' single that was booted in left by Raimel Tapia and scored on a wild pitch by Antonio Senzatela (3-3).

Hector Neris retired six straight batters in the final two innings for his seventh save in as many chances.

Kapler rarely brings Neris out for a second inning, but felt the Phillies' de-facto closer had the stuff to pull it off.

"When he looks as good as he did, sometimes you have to push; he responded," Kapler said.

Brendan Rodgers, Colorado's top prospect playing in his second game, got his first hit with an infield single in the second. Rodgers went 1 for 4 with three strikeouts.

Phillies: INF/OF Scott Kingery (strained right hamstring) played for Double-A Reading in a rehab outing on Saturday and is nearing a return. He went 0-for-3 with a sacrifice fly and a strikeout.