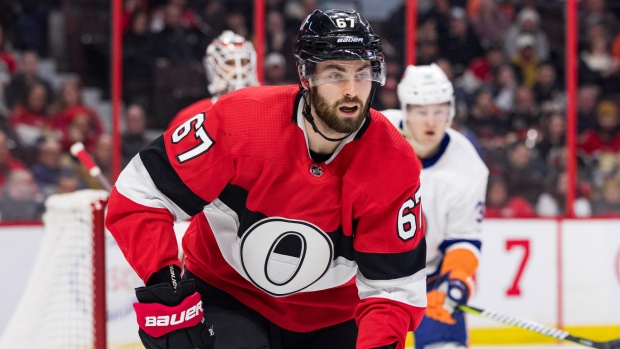 TORONTO — The Maple Leafs should have offensive talent and speed to spare this coming season. What they don’t have available in spades are the attributes Ben Harpur has to offer.

The 6-foot-6, 222-pound defenceman isn’t flashy, but his size and strength are a rarity not just among the Leafs’ stable of blueliners but in the NHL as a whole. Harpur said he won’t be shy about using those gifts when battling for a roster spot in his first season with Toronto.

“My game is being solid defensively first. I’ve been relied upon a lot to use my size and my reach, so if I can use that to my advantage, that could be something that’s attractive to [the Leafs],” Harpur said after a skating session Monday at Ford Performance Centre.

“I think also being a presence on the ice, [not that] I’m going to go looking for [fights], but I’ve proven in the past if it does come to that point I can stand up for myself and stand up for my teammates.”

The trades of Matt Martin and Nazem Kadri over the past 13 months removed much of the grit from Toronto's lineup, so Harpur’s willingness to get physical should be well-received by the rest of the Leafs – many of whom he’s yet to meet.

The 24-year-old joined the organization in July as part of Toronto’s trade with Ottawa that sent Nikita Zaitsev, Connor Brown and Michael Carcone to the Senators in exchange for Cody Ceci, Harpur, prospect Aaron Luchuk and a third-round draft pick in 2020.

While Ceci was the focal point of the trade for Toronto and projects to slide into the team’s top-four blueline rotation with Morgan Rielly, Tyson Barrie and Jake Muzzin, Harpur hopes to emerge as a third-pairing asset over the team’s other left-shot options in Martin Marincin, Rasmus Sandin, Teemu Kivihalme and Kevin Gravel.

Drafted in the fourth round, 108th overall, by the Senators in 2013, Harpur spent three seasons from 2015-18 bouncing between the American Hockey League and NHL. When a full-season opportunity came with a rebuilding Ottawa team in 2018-19, Harpur struggled with his consistency. He ultimately finished with one goal and four assists over 51 games.

While his offensive output in the NHL has always been limited (one goal, six assists in 103 career games), Harpur’s stature does lend itself to killing penalties. He averaged the second-most shorthanded minutes per game (2:27) for the Senators last season.

He joins a Maple Leafs team that lost two of its best penalty killers ­– Ron Hainsey and Zaitsev – to Ottawa this off-season. That glaring team need, combined with his size, could help Harpur in the battle for a roster spot.

“Everything we’ve heard from coaches who have had him, and going through our due diligence, the key is if you can build up his confidence and get him rolling,” Leafs’ general manager Kyle Dubas said in July. “He obviously brings physical elements that are very unique. [Now we’ll try to] dial in on his play with the puck and give him some direction here in the summer of what we’re expecting from him.”

Harpur heard Dubas’ message loud and clear, so rather than spend these last few weeks of summer at home in Niagara-on-the-Lake, Ont., he moved to Toronto right away to give himself the best chance of catching on this fall.

“[Improving my confidence] was a big part of why I came here early, to get settled in and be familiar as opposed to throwing myself into the fire and just coming right into [training] camp,” Harpur said. “I’m settled in now. I know a lot of the people, so I can just go out and perform; I don’t have to worry about anything else. That confidence will be huge for me.”

It’s a hard-won resilience that Harpur can draw upon now, born of overcoming early challenges during his Senators’ tenure. He found the 2017-18 season especially difficult, spending half his time in Ottawa (41 games, one assist) while also checking in with the AHL’s Belleville Senators (19 games, 11 points).

“You kind of live out of a suitcase for a while and you never know when you’re going to play,” Harpur said of that period. “That was a learning curve for me, but if you don’t go through any adversity it doesn’t make you as mentally tough. Those ups and downs affected me more than I would like them to, but that’s stuff I’ve learned from. If I can build some confidence [from that] and get rolling, I think I can be an effective player.”

It would be all the more special for Harpur to become exactly that for the Leafs, the team his father raised him on. One of Harpur’s first hockey memories is watching former Leafs star Mats Sundin play, and the outpouring of support he received from friends and family after the trade has been a welcome boost.

“My phone went crazy for a while there,” Harpur said, laughing at the thought. “There are a lot of Leafs fans back home that I grew up with that were really excited for me. It took a while for it to kind of sink in that I was part of this organization now.”

Harpur has wrapped his head around the reality now, and a meeting with head coach Mike Babcock a couple weeks ago has fuelled Harpur even further. Babcock apparently didn’t hold back on what he’s looking for out of Harpur to help him find success with the Maple Leafs.